As if you hadn't guessed already, all five major United States wireless carriers have confirmed that they will indeed offer Samsung's new flagship phones later this year. AT&T, Verizon Wireless, T-Mobile, Sprint, and US Cellular have all posted pages that say they'll be selling both the Galaxy S6 and Galaxy S6 Edge, though details on exact launch dates, prices, and capacities are predictably hard to find. No matter what your preferred carrier, you'll have an option when the phones come out. 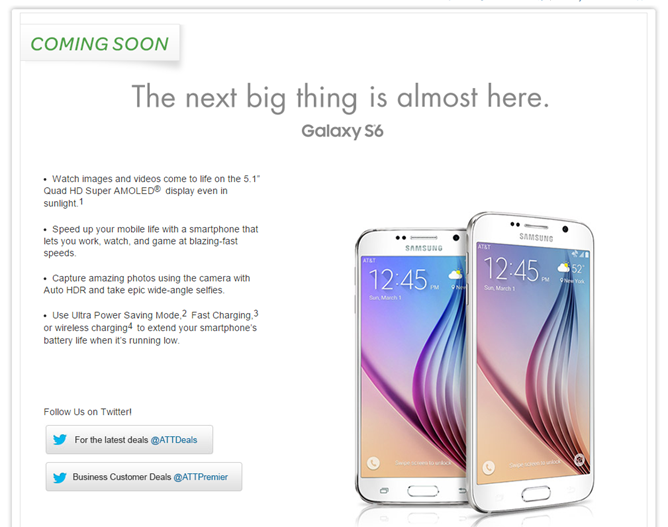 AT&T has a "coming soon" page for both the Galaxy S6 and the S6 Edge, showing off both phones in a white color. They've got the usual "sign me up for news" business, plus a sweepstakes for a Tizen-powered Gear S, but no details on a launch date or price. If you're interested in buying a US phone with a subsidy that will work in the most countries worldwide, AT&T is generally the way to go.

Verizon is showing off the S6 and S6 Edge in blue, complete with a relatively small amount of custom branding - Samsung probably won't let them slap a carrier logo on the home button for the flagship. A white model is also visible in profile. Again, there's no word on a release date or price, but an email signup prominently featured. Verizon phones are generally the only ones that work on the company's proprietary CDMA-LTE network, though the LTE phones are unlocked for use on GSM networks as well.

T-Mobile also gets the blue model, but they're offering "a chance to win an awesome suite of Samsung products" and a hands-on video along with the email sign-up. T-Mobile phones are good picks if you like to switch between GSM networks, and also if you like to modify them - unlike AT&T and Verizon, T-Mobile allows the bootloaders on most of its devices to be unlocked.

Sprint gets both phones in blue, and (say it with me now) there's no mention of a price, date, or capacity. Sprint phones generally work only on Sprint thanks to the carrier's CDMA-LTE network, though some later models also include GSM bands, and a wide variety of MVNOs rely on Sprint's network and can use Sprint phones. You can sign up for email updates if you really must.

US Cellular is showing the S6 and S6 Edge in blue, with the Edge getting a bonus profile shot in white. No dice on price, availability, or capacity. A "pre-register" actually forwards to this Samsung mini-site, which lets you select from all five carriers. How convenient.

The Galaxy S6 and Galaxy S6 Edge will launch internationally on April 10th, and US carriers tend to follow by anywhere from a week to about six weeks. The base model of the GS6 will include 32GB of non-expandable storage, with an expected retail price of $650 before subsidies. The GS6 Edge's price isn't known, but if the Galaxy Note Edge is anything to go by, it will carry quite a premium. Samsung will offer both phones in 32GB, 64GB, and 128GB capacities, though which carriers will offer which variants is up in the air. Most carriers will probably offer the white and blue versions, plus a few exclusives here and there for good measure.

HTC One M9 Coming To AT&T, Verizon, T-Mobile, And Sprint, US Cellular Passes For Now