Verizon has announced that the previously-leaked Galaxy Core Prime, which has a very serious, sci-fi-esque sounding name, will be available on February 26th. It will cost around $200 off-contract (I'm guessing - they say $8 a month on Verizon Edge, which is $192). It has features, like a screen. And a camera. Two cameras, actually. A home button. Did I mention the camera? (Oh, and it actually comes with a promise of a Lollipop upgrade, so that's good, though how long it'll take is anyone's guess.)

As you can tell, then, the Galaxy Core Prime is about as exciting as a bundle of particularly unexciting sticks, despite having an arguably somewhat cool name. So, I added an explosion to the press shot. For excitement. 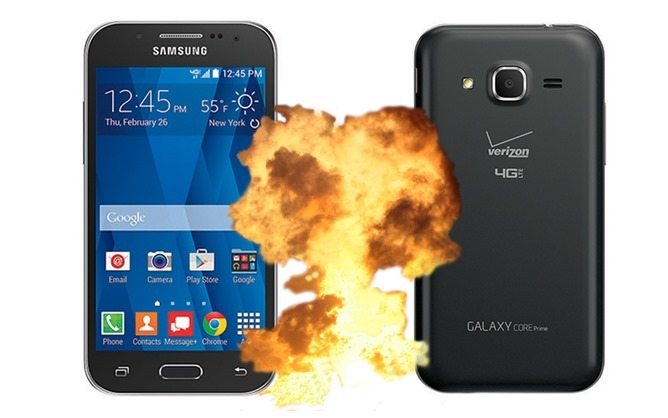 Here are the actual specs.

And here is a press release.

When you pick up your first smartphone you want it to be an easy and smooth experience. Think less “how do I” questions and more texting, selfies and YouTube videos. The upcoming Samsung Galaxy Core Prime™ combines that ease of use with a reliable network for a smooth experience.

Easy Mode on the Galaxy Core Prime creates a simplified homescreen with pre-set apps like Messaging, Camera and Gallery. Enlarged icons are front and center, making it easy to quickly find the apps you’ll use most. Easy Mode is customizable so adding your favorite apps is simple. Frequent and favorite contacts are available with a quick swipe to the right from the homescreen.

Since it will likely be with you throughout the day, having a good camera and lasting battery are essential to the smartphone experience. The Galaxy Core Prime has a 5-megapixel rear camera with various modes like Best Photo that takes a series of pictures, letting you pick the best one to save and share. The 2-megapixel front-facing camera lets you video chat with family or Snapchat with friends with ease.

The 2000 mAh battery is large enough for use from morning to night1 without charging but should you find yourself in a bind, Ultra Power Saving Mode™ will maximize battery life. Your worries should be about not missing an important phone call, not if your phone is going to die.

The Galaxy Core Prime also launches with Advanced Calling 1.0 capabilities, letting you enjoy HD Voice Calling to other compatible Verizon smartphones. Activating this feature also enables simultaneous voice and data use, so you can talk and surf the web at the same time.

The XLTE-ready Samsung Galaxy Core Prime will be available online starting Feb. 26 and in Verizon Wireless stores on March 5 for $29.99 with new two-year activation. The smartphone will be $8 a month on Verizon Edge for eligible customers.

The Galaxy Core Prime, with all of its quad-core and 8GB goodness is now available on Verizon. You'll be disappointed to see that there aren't any explosions on the official order page.

Forbes' Interview With Sundar Pichai Hints At An Uncoupling Of The Various Google+ Entities, ...