Remember Blackphone? Chances are you haven't seen it on store shelves. This $600+ handset, built in response to recent concerns over government surveillance and Internet vulnerabilities, strives to keep your communications private and your information secure. The phone was a joint project between Silent Circle and hardware partner Geeksphone. Today the former has announced it's buying out the latter, giving it full control over the Blackphone project.

Blackphone relies on a custom version of Android creatively called PrivatOS, which uses a combination of privacy-focused apps and encryption services to reduce how much information leaks out. These features come at the expense of usability, so it's hardly a device that has appealed to any but the most paranoid of general consumers. Perhaps unsurprisingly, much of the demand thus far has come from enterprise customers. 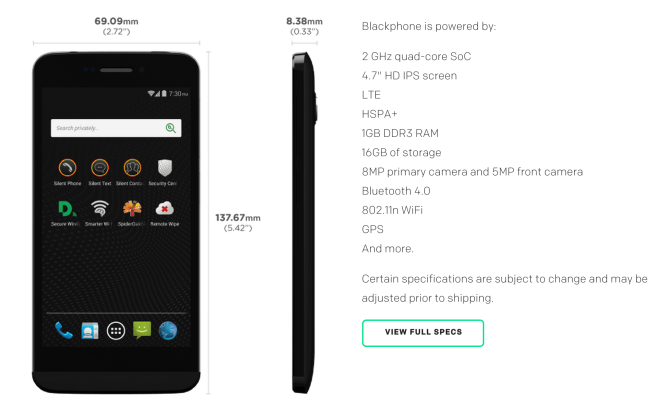 Silent Circle has managed to raise roughly $50 million in a private equity round to support future growth, meaning someone is clearly interested. The company plans to unveil new devices, software, and services at Mobile World Congress next week. You can glean more information from the full press release below.

- Silent Circle has raised approximately $50m in a private, common equity round to support accelerated growth

GENEVA, Feb. 26, 2015 /PRNewswire/ -- Silent Circle today reached an agreement with Geeksphone, co-founder of the Blackphone project, which will allow it to consolidate its leadership position in the enterprise market and announced plans to unveil the world's first enterprise privacy ecosystem at MWC. The news comes shortly after the January appointment of F. William "Bill" Conner as Silent Circle's President and Chief Executive Officer and a member of the Board. Conner, the former Entrust President and CEO and Nortel President, is one of the world's most experienced security, telecom and infrastructure executives, having served enterprises in the industry for more than 30 years.

"Silent Circle has brought tremendous disruption to the mobile industry and created an integrated suite of secure enterprise communication products that are challenging the status quo," said Mike Janke, Co-Founder and Executive Chairman of the Silent Circle Board. "This first stage of growth has enabled us to raise approximately $50m to accelerate our continued rapid expansion and fuel our second stage of growth."

"Just under a year ago, we introduced Blackphone at Mobile World Congress," said Janke. "Since then, we've continued to develop new, privacy-first products for our integrated software suite as well as Blackphone, the first hardware device in our portfolio of privacy solutions."

Reflecting the strong demand for Silent Circle products from enterprise customers, the company is also announcing its agreement to buy out the joint venture between Silent Circle and Geeksphone, which is expected to close this week. The acquisition will result in Silent Circle taking a 100% ownership stake in SGP Technologies and the Blackphone product set, resulting in operating efficiencies and an integrated product roadmap. SGP Technologies had been formed specifically to create Blackphone, the world's leading privacy-first smartphone, named one of Time Magazine's best 25 inventions of 2014 and one of MIT's top 10 breakthrough technologies.

'"I'm pleased to be part of the incredible growth of Silent Circle and to see our capabilities and opportunities rise alongside of the growing recognition of the importance of privacy in the modern enterprise," said Ross Perot Jr, one of the original private investors in the company and Chairman of the Perot Group. "In Bill Conner we have found the perfect leader to orchestrate the second stage of growth and to develop Silent Circle for the enterprise."

'"As the nature and volume of data breaches increase, institutional trust is eroding," said Conner. "There are companies that have been hacked and there are those that don't know about it yet, which means that security in the traditional sense has failed us. With the number of employees connecting to an enterprise's network using their own devices rapidly rising, organizations need a different solution. In short, in a post-Sony and Gemalto world, security breaches have been made both enterprise and personal so it's no longer an issue affecting just the boardroom," said Conner. "At Mobile World Congress we will be introducing new devices, software and services as we unveil the worlds first enterprise privacy ecosystem, a unique platform, based on and built from a fundamentally different mobile architecture – ZRTP."