Motorola apparently intends to expand Moto Maker out to more than just smartphones. According to Wired, the company will start offering the ability to customize your own Moto 360 next month. 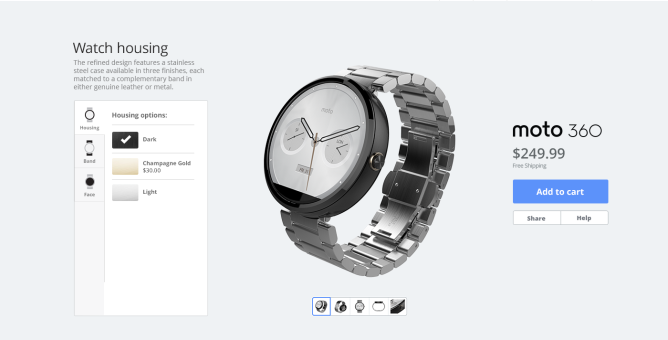 Before you get too excited, Motorola isn't rolling out new color options or anything particularly fancy. Instead, it's letting you mix and match the components already available off the shelf. So you can get the watch casing or metal band in silver, black, or champagne gold; or opt for a leather strap instead. Metal bands come in two sizes (18mm and 23mm). The standard leather straps are 22mm.

So if you've wanted a silver watch with a dark metal band, you will be able to get one without having to pay extra to order the latter after the fact.

Motorola will also let you select one of 11 watchfaces to appear when you first power on the device. Considering how few taps it takes to switch these out, feel free to gloss over this part of the customization process.

Once you're done, the Moto Maker facility in Shenzhen will produce your smartwatch and ship it out. If you don't like the result, Motorola will let you ship it back and try again for free.

Google+ Gets A Much-Needed Facelift For Mobile Browsers And Changes URL Structure To Match ...

Silent Circle Buys Out Geeksphone To Get Full Control Of Blackphone, Plans To Unveil More ...