You might have heard the news already, but the Federal Communications Commission has voted three to two to classify Internet service as a Title II utility in the United States, marking the biggest win for Net Neutrality advocates in... well, ever. A lot of the "people" (remember, in America corporations are people too) who don't like that have issued statements about how much they really want to throttle Internet speed, block legal services, and charge double for content disagree with the FCC, but none have done so in quite the way that Verizon has. For lack of a better term, Verizon has officially gone Full Bitch with its response on its official public policy blog. 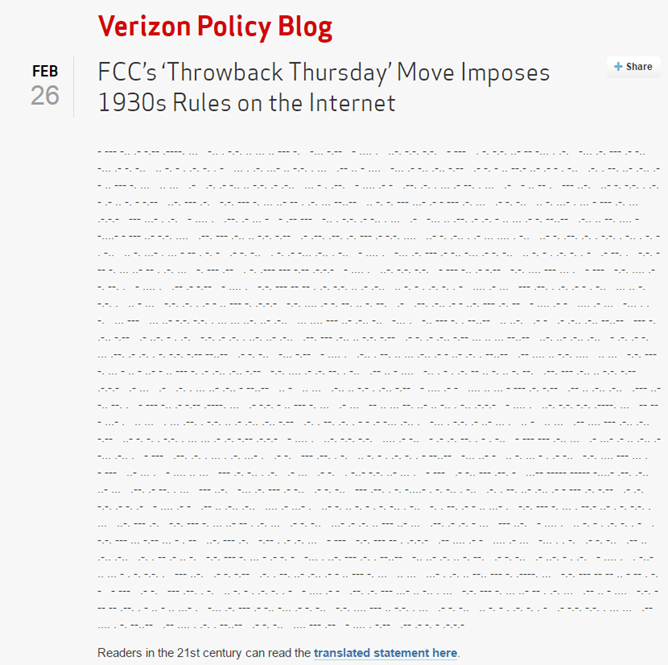 Verizon issued its rebuttal statement in Morse code, calling the FCC ruling (which has the support of the president and millions of Americans) a "throwback Thursday" move, because it's using the Title II telecommunications definition from the 1930s. If it's been a while since your ham radio certification, here's the full text of the statement. Verizon assumes that anyone who disagrees with them isn't living in the 21st century.

Today’s decision by the FCC to encumber broadband Internet services with badly antiquated regulations is a radical step that presages a time of uncertainty for consumers, innovators and investors. Over the past two decades a bipartisan, light- touch policy approach unleashed unprecedented investment and enabled the broadband Internet age consumers now enjoy. The FCC today chose to change the way the commercial Internet has operated since its creation. Changing a platform that has been so successful should be done, if at all, only after careful policy analysis, full transparency, and by the legislature, which is constitutionally charged with determining policy. As a result, it is likely that history will judge today’s actions as misguided. The FCC’s move is especially regrettable because it is wholly unnecessary. The FCC had targeted tools available to preserve an open Internet, but instead chose to use this order as an excuse to adopt 300- plus pages of broad and open- ended regulatory arcana that will have unintended negative consequences for consumers and various parts of the Internet ecosystem for years to come. What has been and will remain constant before, during and after the existence of any regulations is Verizon’s commitment to an open Internet that provides consumers with competitive broadband choices and Internet access when, where, and how they want.

Whether or not you agree with Verizon's judgment that it has the right to charge content creators and end users access fees and prioritize conflicting traffic (see, we can spew a bunch of BS out of context too!), the contention that the ruling is foolhardy simply because it uses old laws is a red herring at best. Someone who was interested only in making headlines or over-simplifying an important argument might conclude that Verizon thinks "old" rules like the Bill of Rights or the Constitution they invoked right in their response aren't important. Hey, all those laws outlawing things like murder, assault, theft, and (ahem) monopolistic business practices are pretty old too - surely they have no bearing on the 21st century!

Verizon Wireless is a wholly owned subsidiary of Verizon Communications, so you can take the pissy response to the FCC's ruling as the company line. Other corporations who stand to be limited by Net Neutrality like AT&T and the National Cable & Telecommunications Association (whose past presidents include one Tom Wheeler, the current FCC chairman), have also expressed dissatisfaction at the ruling, albeit in much less bitchy ways. Corporate lawsuits against the FCC and various attempts to block the rules by opponents in Congress are inevitable over the next few months.