It takes a while to fit the latest version of Android on a device, get it carrier certified, and push it out to users. I get that. But for whatever reason, AT&T's version of the 2014 Moto X got lost in the shuffle. While the pure edition of the flagship phone received Lollipop back in November, with Verizon following shortly thereafter, AT&T's version is apparently only just now going out over the air. 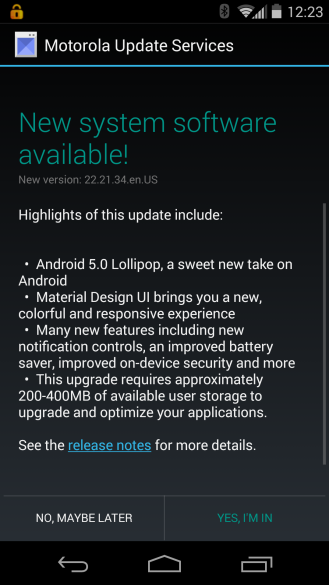 By this point, you know what to expect with Android 5.0.2. You get the cool new app launcher filled with a bunch of redesigned apps sporting Material Design and lots of bright colors. You also get access to all of the Lollipop features we've spotlighted since the software rolled out.

The goods are going out under software version 22.21.34 and require 200 - 400MB of space. You can view Motorola's changelog at the source link below.

[Update: Winner] Win A Nexus 6 And 18 dbrand Skins From AP And dbrand