Can a grown-up company return to the kiddie pool of Kickstarter funding to help with its new product? Of course it can - this is how development works now! This morning the makers of Pebble announced Pebble Time, the company's second generation of Pebble hardware, launching exclusively through a Kickstarter funding campaign (like the record-breaking original two years ago). The company hit its modest $500,000 goal less than half an hour after posting the page.

The Pebble Time gets new hardware goodies like a color e-paper screen and microphone, enabling an experience that's more in line with what smartwatches have become over the last couple of years. While the hardware and software is almost entirely new, the Pebble Time uses the same non-touchscreen design with three control buttons seen on the original model. The waterproof case of the watch is fairly understated, even ugly when compared to the metal and glass seen on more recent designs. 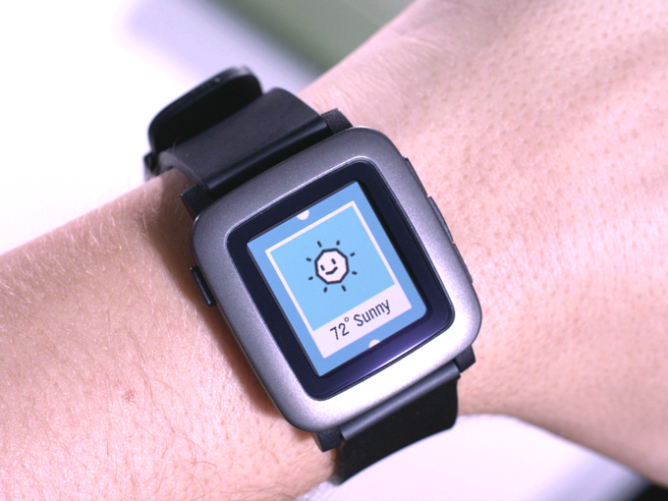 The concept is more or less unchanged from the popular original: connect to your phone via Bluetooth, load up your watch with apps, and check notifications on your wrist. But Time's cartoony software has a new agenda-style paradigm allowing for easier exploration of your personal "timeline," encouraging users to go backwards and forwards to see the events of their day. The new microphone is designed specifically for quick voice dictation replies, but not the more nuanced control of Android Wear.

Pebble Time is 9.5mm thick, considerably thinner than the original and more in line with automatic watches. It will be available in flat black, white with black trim, and black with red trim, with matching (and user-removable) 22mm bands. All of the features of the original Pebble, including the vibration motor and POGO pin charging, are intact. The company claims that the watch will last 7 days on a single charge even with the new screen. 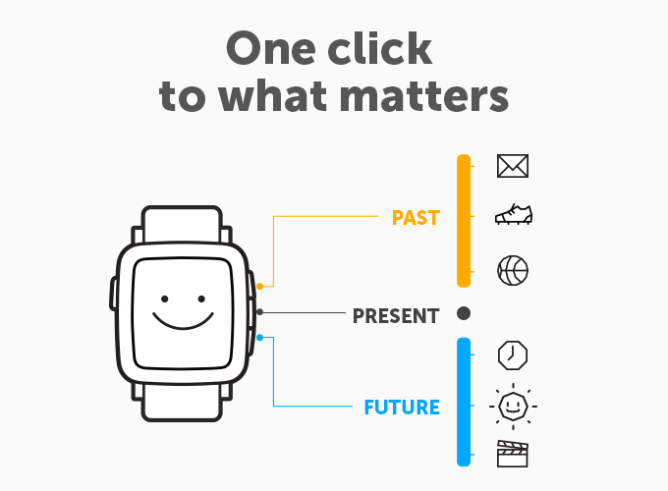 The "early bird" backer level starts at $159 with delivery in May of this year, with a retail release sure to follow sometime later. The Time's software features will be brought to the original Pebble and Pebble Steel, at least as many as are possible.