We can attribute Android's eternal connection with sugary snacks to Google's whimsical use of desserts as codenames; but for many, Android is indelibly linked with grilled meat, thanks to the team behind the the Big Android BBQ. The huge gathering in Texas for Android fans first began in 2009 and continues to grow. Last year, the BABBQ organizers launched a new event in San Francisco to coincide with Google I/O 2014, called the Big Android Meat & Greet. The success of these gatherings sparked a new endeavor called the International Developer Education & Advocacy Alliance (IDEAA), aimed at bringing together, educating, and inspiring developers of all skill levels.

The first event for the newly formed organization is scheduled for Saturday, April 4th, 2015 in Alexandria, VA, just south of Washington DC. The day will open with the DC Code Kitchen, featuring a "menu" of challenges and developer-oriented sessions for both new and experienced Android developers. There will also be an instructional session for those that are just getting started. Participation in this part of the event is free, and even includes lunch at no cost to attendees. 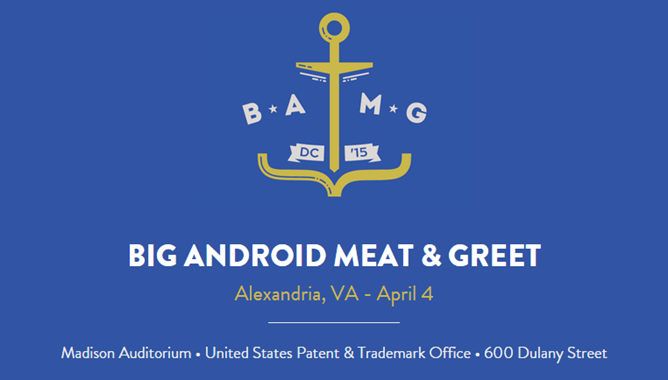 Following the Code Kitchen, ticket holders will be invited to take part in a BBQ feast for dinner, and then board the Cherry Blossom Riverboat for the Big Android Meat & Greet (BAMG). Tickets are priced at $75 per person. Food will be prepared by Chef Ray Walters, the pitmaster for the original BABBQ. During the Meat & Greet, the Cherry Blossom will make a trip from the Alexandria waterfront up to the Potomac River tidal basin, and then return to port for a fireworks display. The scenic tour should run about 3 hours. (So many Gilligan and the SS Minnow jokes!)

Tickets and additional details are available at the Code Kitchen & Big Android Meat & Greet in DC event page. This is the only event on IDEAA's schedule at this time, but it sounds like the organizers are already working on similar events going forward. Even if you can't make this one, keep an eye out for other get-togethers in your area.

February 24, 2015 (Dallas, Texas) - The team behind the Big Android BBQ (BABBQ) is excited to announce the formation of the International Developer Education & Advocacy Alliance (IDEAA). After months of deliberation and planning, Android BBQ, Inc. has decided to expand the scope of its events under a new identity.

IDEAA upholds the same grassroots values as Android BBQ, Inc., but allows the team to hold a wider variety of events that foster professional growth and enrich the entire developer community. IDEAA's logo is formed by the same bits that compose the small wonders we use everyday - 1's and 0's. At the same time, its outlined shape and orange primary color embody the organization's commitment to being open, excited, and inclusive.

Android BBQ, Inc. is well-known for their annual Big Android BBQ (BABBQ) event held in Texas. Each BABBQ follows the same theme as the first event in 2010 -- a grassroots, community-driven celebration of Android that leaves our attendees exhausted and inspired. Since it’s inception, each BABBQ has become bigger, better and meatier.

Last year, the team expanded their line-up by creating an event that coincided with the Google I/O developer conference. They unveiled the Big Android Meat & Greet (BAMG) -- a casual, networking event for I/O conference attendees to meet and mingle with like-minded individuals in a fun, backyard BBQ-esque setting. The overwhelmingly positive feedback received after the BAMG ultimately led to the creation of IDEAA:

“After the tremendous success of our events in 2014 we believed the best way to support developers and our strong partnerships was to transition to this new organization. IDEAA will give us a chance to expand our goals and continue to provide unique quality events that are equal parts education, entertainment, and altruism.” Aaron Kasten, IDEAA President.

The first official event of 2015 produced by IDEAA will be the DC Code KitchenTM and Big Android Meat & Greet (BAMG) held on Saturday, April 4th in Alexandria, Virginia at the Madison Auditorium in the United States Patent and Trademark Office.

The 2015 DC Code Kitchen is open to developers of all ages and skill levels; attendees can partake in a series of development sessions and challenges. There will also be a beginner tutorial for all Android enthusiasts with no experience in coding.

The 2015 DC Big Android Meat & Greet is a ticketed event, open to attendees ages 21 and over. Included in the cost of a reasonably-priced ticket, attendees will enjoy a signature IDEAA BBQ dinner (cooked and served by the original 2010 BABBQ pitmaster, Chef Ray Walters) and embark on a tour of the Potomac River Tidal Basin on the Cherry Blossom Riverboat - a historic paddle boat, docked in Old Town Alexandria, VA. The three-hour boat tour begins at the Alexandria waterfront and heads north up the Potomac River tidal basin, where you’ll find gorgeous views of DC monuments and cherry blossoms. The return to dock will be capped off with a nighttime fireworks display from the SW DC waterfront starting at 8:30pm.

The DC Code KitchenTM is free and will include lunch. The Meat & Greet, a separate networking event, includes a BBQ dinner and boat tour for $75. All drinks and food at the BAMG and on the boat are included in the ticket.

The International Developer Education and Advocacy Alliance was developed: to broaden, build and maintain a visible program which fosters community support, provides for professional development, and enriches the overall mobile development community - through funding for programs and initiatives that foster innovation, creativity and education.