In a document posted to their corporate website, Netflix sought to describe their long-term plans. The piece reads like a fascinating mixture of investor relations propaganda and fantasy or media theory. While it touches on all kinds of different aspects of their business and the changing environment it exists in, perhaps the most intriguing part has to do with how they are describing their ideal content catalog.

We don’t and can’t compete on breadth of entertainment with Comcast, Sky, Amazon, Apple, Microsoft, Sony, or Google.  For us to be hugely successful we have to be a focused passion brand.  Starbucks, not 7-Eleven.  Southwest, not United.  HBO, not Dish.

Wait a minute. This is Netflix! We first knew them as, like, the biggest movie rental store on Earth. Their change in focus to streaming video has been obvious to all of us, but many thought they still wanted to have an exhaustive collection of current and past popular movies and TV. Most of this forward-looking piece feels very optimistic, but this aspect is harshly realistic.

What kind of brand will Netflix be?

And I say realistic, not pessimistic, for a reason. If there's anything for Netflix and anyone else in this industry to have learned in the past several years, it's that you can't have it all. There are too many content producers and owners to feasibly deliver each of their stuff on your service in a way that is acceptable to all. What Netflix and its competitors can do, though, is have the best selection. This can be accomplished in several ways. You can know which movies and shows are the best and make sure to get the rights to them. Alternately, you can make the best movies and shows. Netflix is hoping to accomplish both. 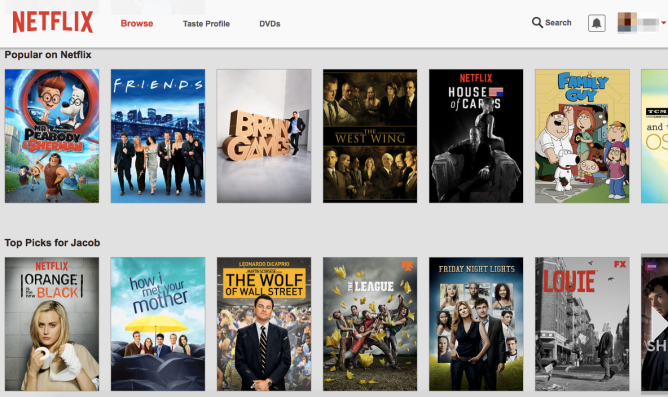 They also stress that they have a narrow focus:

We don’t offer pay-per-view or ad-supported content.  Those are fine business models that other firms do well.   We are about flat fee unlimited viewing commercial-free.

How Netflix will grow

Netflix also makes some predictions about the home entertainment market in general. They describe cable TV as "linear." According to them, people don't like linear TV and are simply waiting for the chance to ditch that model, provided alternative options become available.

However, Netflix recognizes that the linear TV delivery system, now in many cases fiber optic cable, is exactly what is needed to stream content. This is a nod to the current cable operators, who will not want to go down quietly. Netflix says they will be fine because they can sell broadband and, maybe, act as a paywall to other channels like WatchESPN or HBO Go.

The other shift they seem optimistic about is Ultra HD. Netflix assumes people want to watch shows in 4K and they know that traditional cable is not ready to deliver this resolution; they don't even do 1080p yet! I'm a little doubtful about whether people will care enough about Ultra HD that it drives them away from cable, but it's certainly a plus for Netflix. The other possibility for growth they identify is the improvement of broadband networks, since they seem to believe that insufficient bandwidth is deterring subscriptions domestically. It certainly will be a problem for 4K content.

Netflix wants to continue its international offerings. They claim to be in 50 countries already and said, "by the end of 2016 we intend to be available pretty much everywhere in world." Bold! But if they want to continue to grow, the easiest way is to get into untapped markets.

Google Is Prepping Major Changes To Wallet To Better Compete With Apple Pay, More Will Be ...