Sprint hasn't said anything about John Legere's assertion that T-Mobile is now the larger of the two carriers, but it is rolling out a new plan apparently intended to slow Tmo's progress. The new plan is actually just a limited time offer in Sprint's existing Family Share Pack tiers. For $90 per month you can (sort of) get 12GB of data to share across 10 lines with unlimited SMS and voice. As with all mobile plans, there are plenty of caveats. 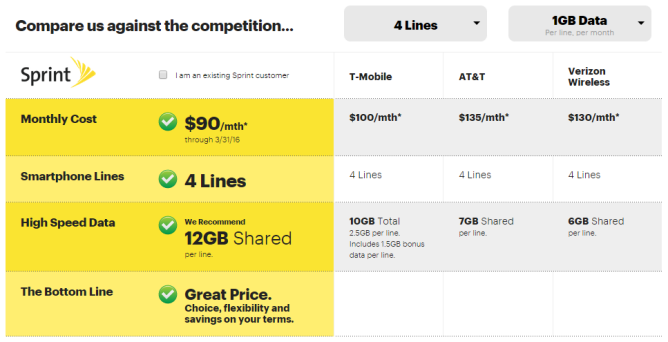 As you can see above, Sprint's base price is lower than T-Mobile's but you only get that if you're switching carriers. Current Sprint customers still have the line access fee on top of the $90 plan cost, but that price is good for any number of lines from three to ten. The 2-line plan is only $75 per month with the same waived access fee deal. The line access price has gone down to $15 per phone for current customers, but that will still add up. T-Mobile's $100 plan with slightly less data includes 4 line fees.

Sprint's plan is good through March of next year, but T-Mobile's deal is currently slated to end at the beginning of 2016. When the Sprint deal is over, customers will have to start paying the line access fee again.