When we mention iFixit here on Android Police, it's often because of the team's excellent teardowns. They know how to take apart the most complex devices and figure out every single part that goes in them. However, iFixit — as the name suggests — is more popular for its comprehensive repair guides that span computers, electronics, and iPhones. Android has finally joined the ranks with a really extensive catalog of supported gadgets.

The iFixit Android Hub organizes devices by phones, tablets, watches, and TV. At this point, the last two sections contain teardowns for the most part, with a few guides available for the LG G Watch and the Nexus Q. Tablets are well organized but, for now, they're also full of teardowns. I spotted some Samsung repair guides, but both the Nexus 9 and the 2013 Nexus 7 didn't have any yet.

The most extensive coverage is predictably in the smartphone category, with over 200 devices supported. There, you'll find detailed repair guides for the Nexus 6 and 5, LG G3, Galaxy S5, HTC One M8, OnePlus One, and more.

The guides usually span everything from changing a non-removable battery, to replacing the screen, camera, MicroUSB ports, headphone jacks, microphones, and more. Step-by-step instructions with images are used throughout, with tips, notes, and all the information you might need while disassembling and putting your phone back together. 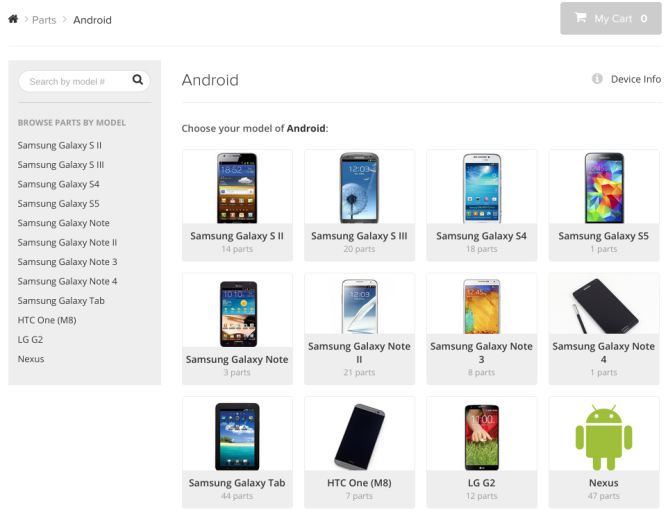 The necessary tools and parts are linked and well documented, so you know what you need before you get started. iFixit sells most of the tools, as for the parts, it has a small store currently catering to most Galaxy S and Note phones, with the M8, G2, and some Nexus parts as well. For the rest of the devices, you'll have to use other vendors.

Guides are currently submitted by the iFixit staff and students, but you can contribute yours should you have a device that isn't covered yet and that you know how to take apart and fix. And if you're still a novice, there's a question segment for each model where you can ask the experts about the problems you're currently facing.

I've never tried to fix a phone myself, but I know a lot of DIYers, modders, and fixers, who will be ecstatic at the news. Instead of having to hunt down the forums and blogs for some obscure how-to, it's fantastic to finally have a well organized, properly maintained, and clearly explained repair guide catalog for Android.

PSA: Toggling WiFi, Bluetooth, And The Flashlight Works Flawlessly With Voice Commands In ...