One of my favorite innovations that has started to become more mainstream over the past several years is wireless charging. I'm bummed that every phone doesn't have it at this point (looking at you, Motorola - the Moto X should've been qi-compatible!), because it's easily one of the most convenient changes of all time. OK, maybe that's a little hyperbolic...but really, I do love it.

When it comes to wireless charging, my go-to charger has been the Tylt VU for as long as I can remember. The angle is great, it's super easy to use, and it's large enough to charge basically everything I own that has wireless charging. That last bit is also its biggest downside: it's big. I wouldn't call it portable by any stretch of the word. Tylt knew that, too.

That's where the VU Solo comes into play. It's a much smaller, much more portable wireless charger. It also has a microUSB port instead of a proprietary charging port, so it can use the charger that came with your phone (or any other microUSB charger). That's super convenient. At first glance, the VU Solo reminds me a lot of the 2013 Nexus wireless charger, albeit a bit larger. The increased size is, of course, a big bonus, as it allows larger devices (like tablets) to use the charger without issue. Otherwise, it's pretty simple and just kind of gets out of the way.

The charger itself is very portable and lightweight, measuring in at 3 3/8-inches x 3 3/8-inches x 1/2-inches and weighing in at just 75 grams (2.6 ounces). The charging pad is about 3-inches x 2 7/8-inches. It's super compact, which makes it very easy to toss in a bag for travel.

The overall layout is equally as simplistic: there's a microUSB port at the back, a charging light on the front, and a couple of sticky pads on the bottom to keep it in place if you don't plan on taking it anywhere. It also ships with its own USB cable, which features what Tylt calls "ALIN" - a small, repositionable plastic "barrier" that can be used to easily position the phone on the charger. Just toss the phone on the Solo, then slide it till charging kicks in. Once it's charging, you can move ALIN into position at the top of the phone, making it easy to ensure the phone is always in the correct place every time it's put on the charger. How well it works

I think the primary difference in using the VU and VU Solo is the angle of the device when it's on the charger. Whereas it's easy to glance over at the phone while it's on the VU, the Solo is flat so it's easier to take the phone off the charger to look at it. I don't really think that's a dealbreaker, but I'm sure someone out there will find a reason to complain about it.

Otherwise, there isn't a lot to say about the Solo. It charges the device, I didn't notice a huge difference in device temperature when taking it off the Solo, and it's easy to use. 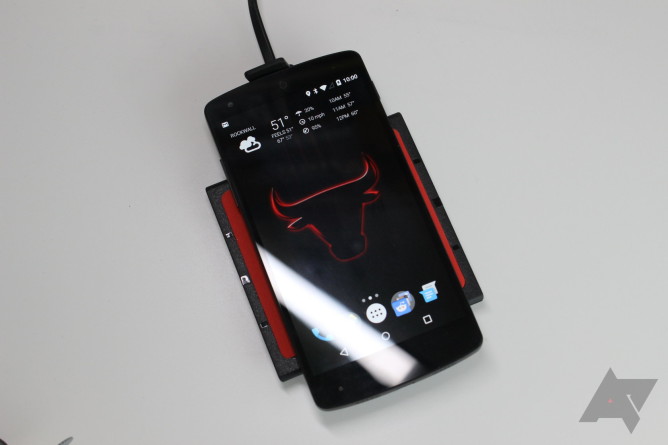 The big question you have to ask yourself is how badly you want to go wireless, and how much you're willing to spend to get there. At $50, the VU Solo is one of the more affordable non-generic wireless chargers on the market, but when compared to a more traditional plug-and-cable setup, it's still pretty pricey, especially when it may not work with all of your devices (read: non-Qi-compatible devices).

That said, if you're looking to get into the wireless charging scene (is it really a scene? I dunno) or are just looking for a smaller Qi charger to take on the go, the VU Solo is a solid choice. Are there cheaper options? Sure. Are they as reliable (my VU has been going strong for well over a year now)? Who knows - feel free to pick one up and find out for yourself.

If that's not a gamble you want to make, the Solo is probably the way to go. Head below to pick one up for yourself.