Android 5.0 has a lot of smart features, and battery saver mode is one of them. When your phone reaches a user-defined low battery level, Lollipop will automatically reduce animations, turn off most background data, cut vibration from alerts, and lower the standard brightness on the screen. It's a smarter implementation of the feature than, say, the ultra power saving modes on recent Samsung or HTC phones, which disable all but a few apps. 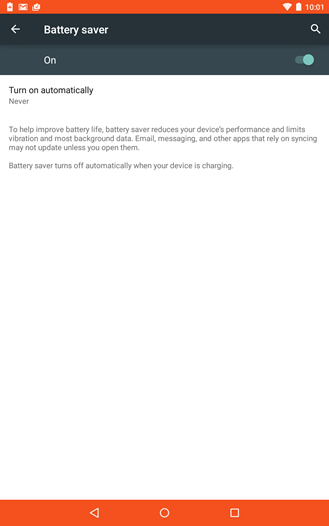 It also makes the phone's UI switch to a bright orange theme when activated, almost like you just enabled Federal Penitentiary Mode. The nav bar, notification bar, and other elements of the standard AOSP interface are so bright that they seem like they're trying to punch you in the eyeballs. It makes sense - the color shift is an immediate and unavoidable visual cue that You Are Low On Battery. But some users don't appreciate the change, even if they do like Battery Saver mode itself.

Enter Xposed. Now that the developer has an alpha version of the Xposed framework up on Android 5.0, module makers have set to work fixing the software's little annoyances, like the bright orange battery saver theme shift. This module will remove the orange theme without affecting any of the other battery-saving tweaks. Developer "TheFragen" says that he has tested it on a stock Nexus 5 with no problems, but it isn't working on my DROID MAXX with CM12. Whether that's a problem with CyanogenMod, the Xposed alpha, or this particular module, I couldn't say.

The module is called "xBatteryTweaks" upon installation, because the developer intends to add more features in the future. Right now making battery saver mode less awful is good enough for over 500 downloads, with many more to follow I'm sure. Obviously you'll need to have your software rooted in order to use Xposed or this module.