From time to time, Google engages in A/B testing with its live products. Flipping switches from somewhere deep in its Mountain View HQ, Google will turn on new design tweaks or feature changes for small groups of users, and measure their impact on engagement. This is generally a helpful process for validating design decisions, and occasionally we catch them in the act and get a peek at what might be around the corner.

Today, reports started popping up that Google might be testing some UI tweaks with its Google+ app for Android. Before you get excited, these tweaks don't include a hamburger menu.

They do include a new stream layout with full-width tiles, and a new set of icons for the "+1," "comment," and "share" actions. For some users (like Daniele Pantaleo) these changes are even appearing mid-stream.

Following that post, we were able to get confirmation from other users that these changes were showing up. 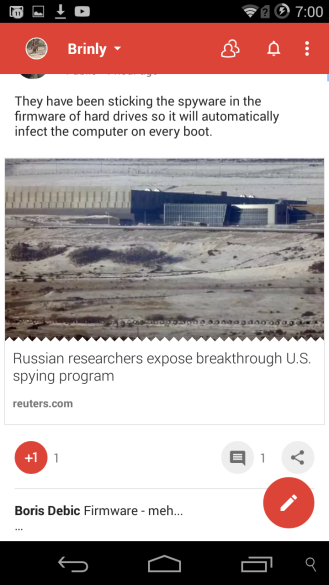 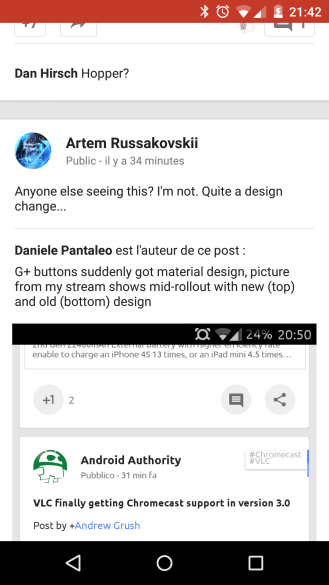 The "+1" action seems odd at first, since the count shows up outside the icon, reading as "+1 1," or whatever the number may be. Though keeping a circular shape with the count inside would be hard or impossible to do elegantly when a post reaches triple or quadruple digits.

Additionally, using full-width sheets with breaks between is a design technique already used by apps like Inbox. If these changes do become final, this writer is hoping for a a similar "open" animation. But of course we can only speculate - there's no way to know if these changes will show up for all users, but for now we can admire from afar.