One of the lamest things about most modern Android devices is the lack of color options. One person can only choose between "Snow White," "Black Velvet," and "Rose Gold" so many times before wanting to scream, after all.

For situations like that, there's dbrand. They make custom skins for a variety of devices, allowing users to modify their device however they see fit (and change that look on a whim with different skins). Tired of looking at that stark white Note 4? Throw some red leather on it. The blue Nexus 6 not doing it for you anymore? Spice it up with the look of bamboo. Want to vomit every time you see that boring black Nexus 5? Sounds like it's time for a lime green front and bright orange back to me. 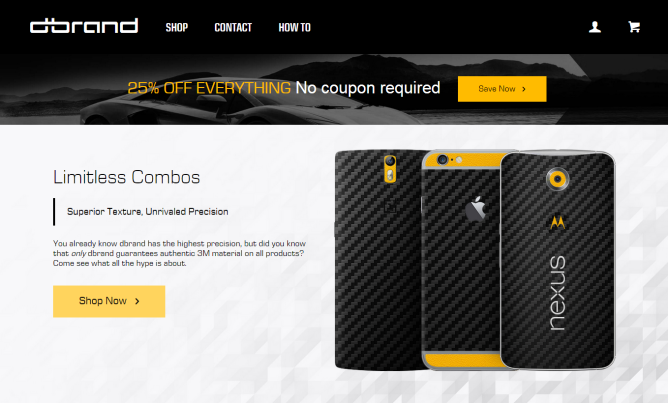 If you're feeling what I'm spittin, then you'll also be happy to know that everything at dbrand is 25% off for today only. That means you'll pay only three-quarters of the regular price, which is a pretty solid deal. This deal is to celebration the launch of three new skins: Moto G 2014, Note 4, and Moto X 2014, so if you have one of those phones you're in even more luck.

Now run along, young grasshopper, and skin the heck out of thy phone.