As nice as Google Play Music All Access is for music lovers (and it's gotten considerably nicer since essentially being merged with YouTube Music Key), the branding is a bit of a mouthful. We've been sent a series of tips that indicate that Google may shift the name sometime in the future... but don't hold out for something particularly ingenious. According to our tipster, the new name might be "Google Play Music Unlimited," as indicated way back in July of last year.

At least some of the portions of Google's support text refer to "Google Play Music Unlimited," particularly the newer email messages sent to customers. As it happens my All Access subscription was up this morning, and in the automatic alert email sent to me, Google refers to the service as "Google Play Music Unlimited." We've seen similar messages sent to readers from January at the earliest. Another user found something similar - check your own automated emails and you may see the same thing. 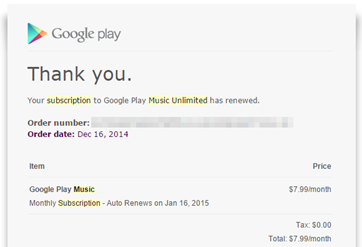 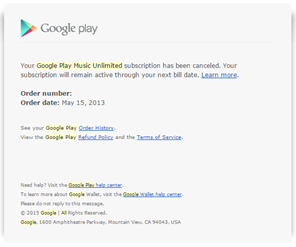 That's mildly interesting, but I doubt it will change some of the confusion surrounding the subscriptions to Google Play and YouTube and their intersection. And considering how long this has been running around, it's just as possible that "Unlimited" has become shorthand at Google HQ and we're seeing the effects of mildly lazy copy editing.