Let's be honest here - Amazon's Fire Phone was a complete flop. It makes a lot less sense than something like the Fire Tablets, which are at least somewhat useful outside of just being a front for Amazon's store (which is precisely what Fire Phone is). But the hardware is solid, and it's not a bad phone -- especially when you can get it for $199 off-contract and unlocked. Throw in a year of Amazon Prime, and you've basically got a really decent handset for a Benjamin. It's not perfect, but easily worth a hunnit. 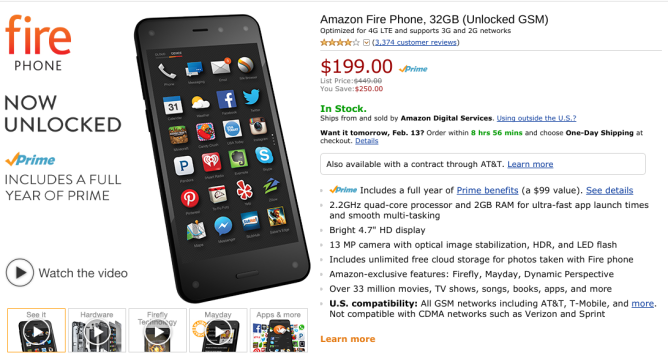 And right now, if you're in the market for something cheap or just want to see what Prime and Fire Phone are all about, you can score one for exactly that. This isn't the first time Amazon has dropped the price of the Fire Phone this dramatically, and it probably won't be the last...at least until it can completely clear out stock and forget all of this ever happened.