In his review of the original SHIELD a year and a half ago, Jeremiah Rice noted that NVIDIA's gaming gadget was amazingly well-suited to game emulators. Combined with a robust emulation scene on Android, especially for older game consoles, it's possible to play a ton of great games on the SHIELD without ever stopping by the Play Store. This morning NVIDIA issued a software update specifically to improve performance for game emulator apps. 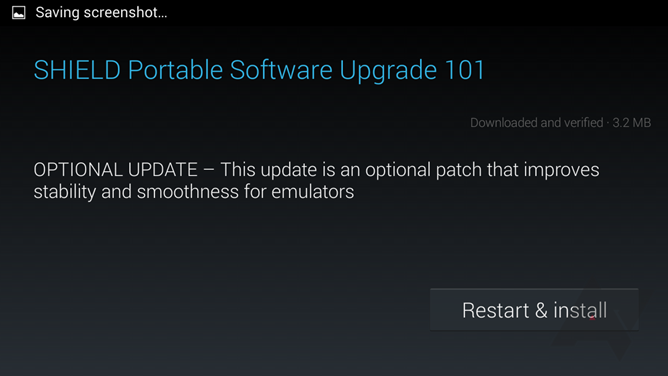 Update 101 is tiny, just over 3 megabytes, and in fact NVIDIA's release notes say that the OTA is "optional" (something you don't often hear from manufacturers). Even if you're not an emulation fan yourself, the nature of Android upgrades means it's probably easier to download and apply it than to ignore it (and the SHIELD's unlocked bootloader means that root users aren't inconvenienced). Exactly how the update improves emulator performance isn't mentioned, but NVIDIA's software engineers are no strangers to tailoring tweaks to one class of application or even a single program, as owners of any GeForce graphics card can tell you.

Unlike most phone and tablet manufacturers, NVIDIA tends to send out its updates to all users at once. If you don't see the notification check the Settings menu for a manual update. The Android version underneath is still 4.4.2, but considering the SHIELD Portable's highly targeted market, I can't say that I'm upset that mine isn't running Lollipop yet.

Space Sketchr By Left Field Labs Lets You Doodle With Project Tango, And It's Pretty Impressive ...