We previously provided you with an in-depth, totally true* report on the origins of the Verizon Ellipsis 8, thanks to the efforts of dedicated Android Police writer Michael Crider. It was pretty clear from the hard-hitting coverage, if I may be so bold as to toot our own horn a second time, that this was an overpriced, no-name tablet that nerds and disinterested folks alike would be better off not spending their money on.

But maybe you missed our coverage. Maybe you're so enamored with Big Red that you had to own something with the Verizon logo stamped just below the screen. Maybe someone else bought the device and agreed to sign the two-year contract with no intention of ever using the device, so you figured why not use it yourself? (Edit: Maybe you got one as part of a deal, as another top-notch AP writer points out). Whatever the reason you own the 7.9-inch tablet, you should know that an over-the-air update is heading your way.

The changelog accompanying software version QZ3_31F22 is surprisingly lengthy, but despite its looks, there's nothing to get your hopes up for here. Want Quickoffice preloaded? There you go. You also get an updated My Verizon Mobile app, a security patch from Google, and a number of stability enhancements. 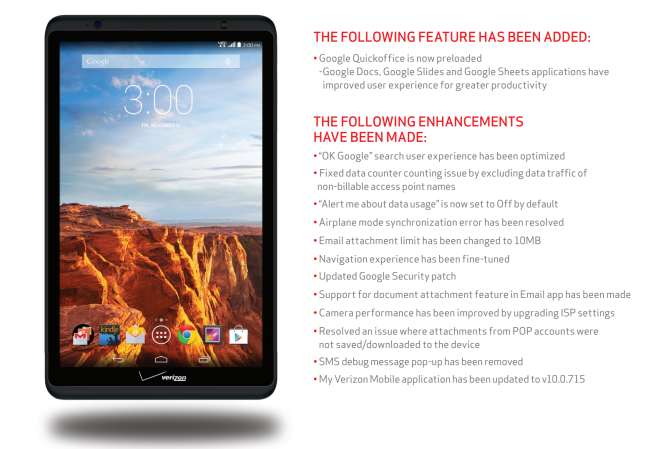 So no, this OTA isn't particularly exciting, but then again, you already knew that.

Sony Announces The Low-End Xperia E4 With A MediaTek Processor And A Dual-SIM Variant, Leaves ...