If you're wondering what NVIDIA has been working on for the last few months, you'll only have to wait a few more weeks to find out. The gaming and graphics company has sent invitations to technology press, including Android Police, for a presentation on March 3rd in San Francisco. According to the email, NVIDIA CEO Jen-Hsun Huang will be demonstrating something "5 years in the making" that will "redefine the future of gaming." 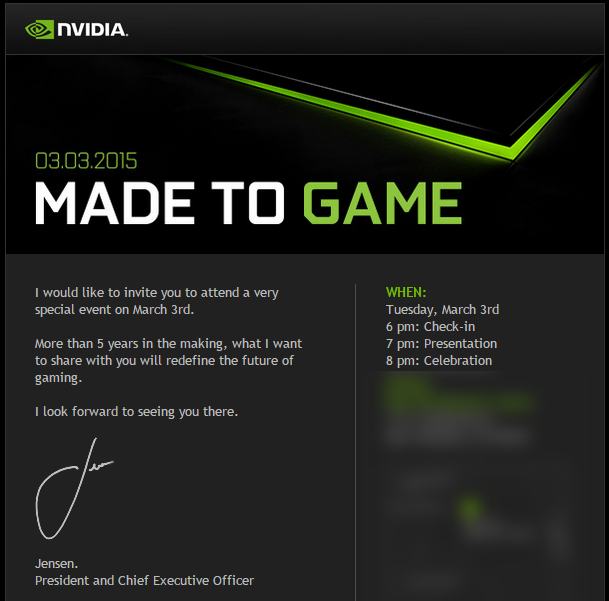 Android fans are obviously looking for something centered around the new Tegra X1 chipset, which NVIDIA demonstrated last month at the Consumer Electronics Show. That particular event did not include any new consumer-grade hardware, instead focusing on the X1's impressive specifications and applications for embedded electronics in the auto segment.

The original Tegra chipset was announced in 2008, with the first product to use it being the Microsoft Zune released in September 2009 - a little less than five and a half years ago. That being said, the announcement is quite vague, and NVIDIA has interests far beyond Android and mobile in general; it is the largest provider of discrete PC gaming GPUs, after all. It's possible that the March announcement won't have anything to do with mobile. An invitation to this site does indicate that whatever will be shown will be at least somewhat relevant to our readers.

I should also mention a previous report by Android Police stated that a new generation of the SHIELD Tablet would not be released in March, though that doesn't preclude an announcement. This event will be held, perhaps not coincidentally, just days before the beginning of Mobile World Congress in Barcelona. It's possible that the announcement of OEM products in the US could be swiftly followed by manufacturer announcements in Spain.

Android Police will be reporting on NVIDIA's press event.