Brain training sounds like a mundane exercise, but a steady wave of sites and apps wants us to think of those words as anything but (we all know about this one). Each promises that you can improve your mental capacity in some way through a combination of puzzles and games.

Peak fits into this mold. The bright and colorful app has attracted a significant following over on Apple's mobile platform since its launch in September, with millions of downloads spread across two dozen countries. Now the experience is coming to Android.

The app tries to improve your focus, language skills, problem solving capability, and something called mental agility. It does so through a series of games, which you play every few days in order to keep your brain from falling out, or something of the sort. Some of the challenges are word puzzles (one of them I swear I've seen before), while others may feel more akin to Tetris or Minesweeper. The app lets you track your performance and see how your brain works in the form of a chart. Peak is free to download, but to get all of the features—such as the full selection of games, personalized goals and training, and advanced statistics—you need to subscribe. Your options are $4.50 a month or $36.88 a year. Payments are handled through Google Play. 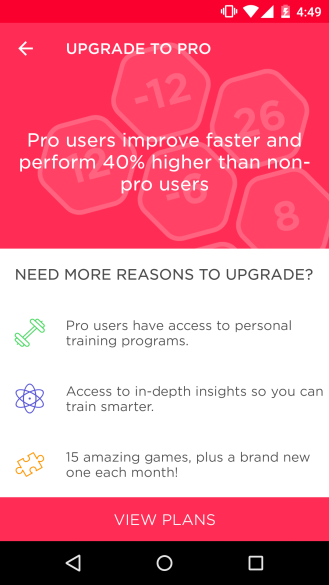 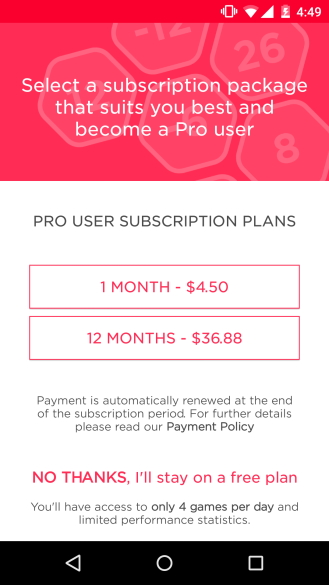 The free version limits you to four games per day, and it doesn't offer the detailed statistics you can expect from the pro version. But if your response to that is a "meh" with a shrug, then by all means, enjoy training your brain without paying a dime. London, UK (February 9, 2015) -- Peak, a leading mobile brain training app, announced today the release of an Android app, now available for download on Google Play. Since its iOS launch in September, Peak has been named one of the App Store’s Best Apps in 24 countries, with millions of downloads and tens of thousands of Peak Pro subscribers.

“We are seeing a shift in consumer behavior, as millions are realizing that a strong, healthy mind is key to a meaningful and successful life,” said CEO Itamar Lesuisse. “They are looking for new ways to keep track of their mental progress and improve their lives. Even politicians are choosing to invest their time in mental exercises. MP and Chief Secretary to the Treasury Danny Alexander is reported to have been playing Peak on his iPad recently, after ditching Candy Crush.”

As the industry for brain health software applications and biometrics grows to a projected $6B in the next five years, Peak has quickly become a force to be reckoned with. With its 22 brain games, Peak is used daily by millions of users in more than 100 countries. The largest number of users are in the US and the UK, followed by Europe, Latin America, and Australia.

“In 2014, we heard from thousands of app users how our brain training app is improving their daily lives,” added COO Sagi Shorrer. “We are excited to bring the same benefits to Android users today and to see the additional growth 2015 will bring—including more platforms, new content categories, and localization of the app to more markets.”

Designed in collaboration with a team of neuroscientists, Peak generates insights that allow users to become more aware of their mental strengths and weaknesses over time, and continuously strengthen a wide number of cognitive skills.

The new app is available in English, French, German, and Brazilian Portuguese, with additional games and languages forthcoming.