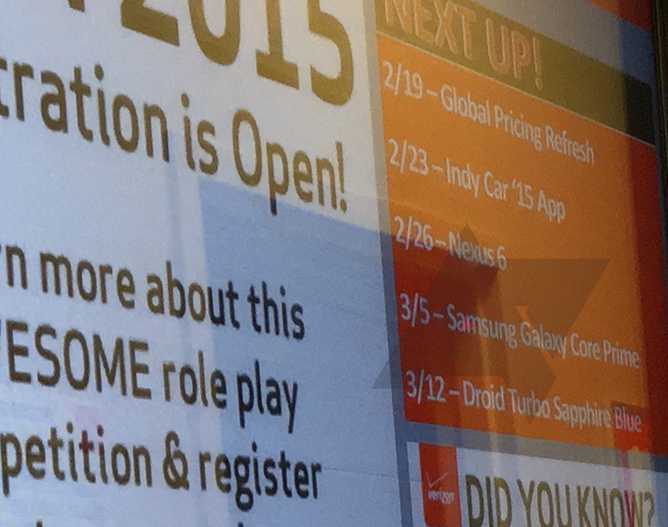 Verizon's model of the N6 will probably be identical to the ones on the Play Store and other carriers, at least in terms of hardware - the vanilla phone already has a Verizon CDMA-LTE compatible radio. The only difference will be the extra branding and, almost certainly, some carrier-specific software tweaks. It's also reasonable to assume that Verizon models will be locked down and unable to function with other carriers in the US [Update: Verizon employees in the comments section say that this is apparently not Verizon's current policy for LTE devices, unlike the N6 on AT&T.] There's no word on a price, but expect it to be in line with AT&T and the like for subsidized and off-contract phones. (Please, for the love of God, don't buy a Nexus 6 off-contract that's locked to Verizon.)

The carrier will also get the Samsung Galaxy Core Prime on March 5th, a budget phone originally released for the international market back in November. It's a relatively small 4.5-inch device with an 800x480 screen, a Snapdragon 410 processor, 8GB of on-board storage space, just one gigabyte of RAM, and a 5MP rear camera. For those who love the Motorola DROID Turbo's bombastic hardware but don't like the red and black color scheme, a sapphire blue model will launch on March 12th. That's sapphire as in color, not sapphire as in synthetic screen covering.