Sprint is really getting on the Lollipop train lately with updates for the HTC One M7 and Galaxy S5 already announced. Today, we have a leaked internal Sprint document that claims two other devices are getting Lollipop soon—the HTC One M8 and LG G3. 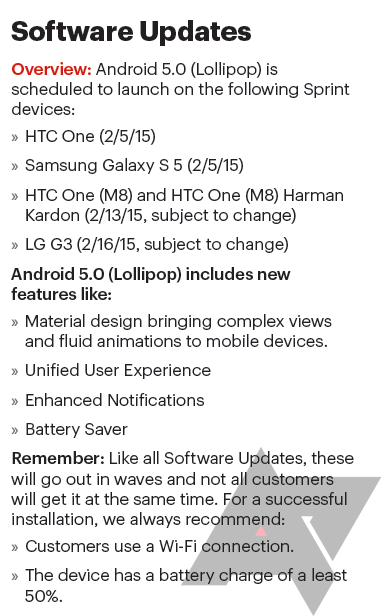 According to the document, the M8's Lollipop update is slated for February 13th and the G3's is set for February 16th. The M8 update will include both the regular device and the Harman Kardon special edition. Both these dates could change in the event issues are discovered, so it's not set in stone. It also lists the now-official GS5 and M7 updates.

The document doesn't offer a ton of information on what it will bring, but it's Lollipop. You should have a handle on what that will include by now. As with most updates, Sprint plans to send these OTAs out in waves.

Timely Gets First Significant Update In Ages With Material Tweaks, Support For Alarms/Timers ...