Even though HTC admitted, just a few days ago, that it won't deliver on its promise to roll out Android 5.0 Lollipop to all One M7 and M8 devices in the US less than 90 days after the source code's release, the company has been busy trying to meet a date as close to its original deadline as possible. Yesterday, we learned that Sprint's One M7 variant would be receiving Lollipop today, and now we're finding out that the phone's Developer Edition has started seeing a similar upgrade. 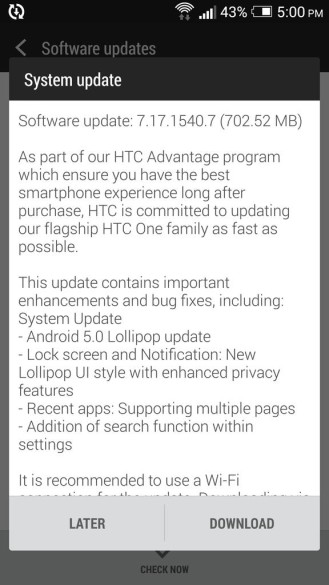 According to @LlabTooFer, the 702.52MB update brings the device up to Android 5.0.2, with Sense 6.0 in tow. The version number is 7.17.1540.7, and thanks to a screenshot provided by @tungbn91, we know that HTC is emphasizing Lollipop's new lockscreen and notification interface, scrolling Recents with multiple pages, and searchable settings. Not much else is known at the moment, but in custom HTC fashion, you should expect a sensible mix of AOSP and Sense in this version as well. Sunrise Calendar Updated To v2.0 With A Tablet UI, More Than 25,000 Downloadable Event ...