It's been four months since the Nexus 6 went on sale in the US Google Play Store, complete with radio support for all five major US carriers. AT&T, T-Mobile, Sprint, and U.S. Cellular all sell the phone in one fashion or another, but Verizon has been interestingly silent on a subsidized carrier release. (Verizon Wireless doesn't play well with others.) But according to the latest promotional image on Verizon's website, it might be coming soon.

Droid-Life spotted the advertisement below earlier today. It's pretty self-explanatory, but all you can do at the moment is sign up for Verizon's promotional email. And take it from someone who spent a month waiting for the Verizon launch of the Galaxy Nexus: it's basically useless. So yes, we're still in the dark as to when we might actually see Verizon launch a retail version of the N6 - for reference, it took them about five months to start selling the Verizon-compatible Nexus 7 2013 LTE. 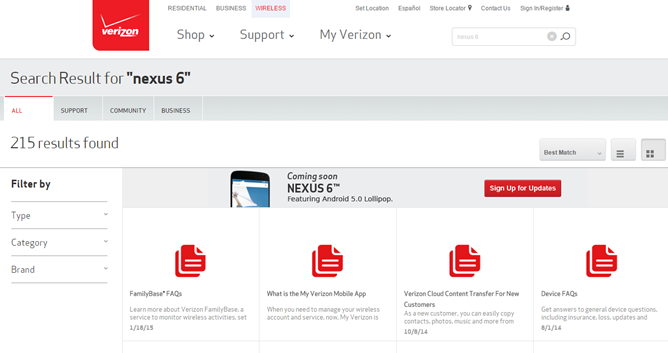 The only real advantage to buying a Nexus 6 directly from Verizon would be the eligibility for a reduced price via a subsidy or using the Edge installment payments. Current Verizon customers can buy a Nexus 6 from the Play Store and simply slide in a Nano-SIM card, though starting a new Verizon account with a new N6 is tricky. Buying a phone directly from Verizon might also limit your options for switching carriers or fast software updates in the future.