Talon for Twitter (Plus) has received its biggest update since its (re-)release in October, bringing with it a host of improvements. Today's update includes a new activity page, which aggregates mentions, retweets, follows, and favorites into a single timeline view. Also new is the "muffle user" feature, which is a midpoint between muting somebody and fully following them. 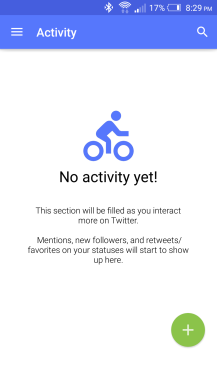 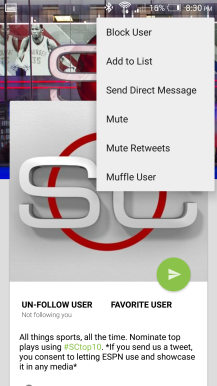 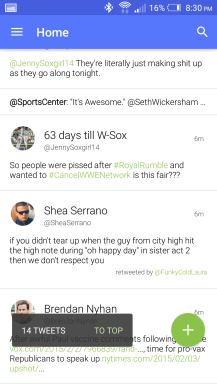 In the screenshot above, you can see what happens to a muffled user. Their tweets aren't invisible to you, but they appear as just a single condensed line. If an account's tweets are redundant or annoying, you can have them minimized rather than gone entirely. So, in this example, Sportscenter is valuable sometimes, but not when I'm uninterested in this particular day's sporting events.

Plus is a reincarnation of the original Talon app, which reached Twitter's limit of 100,000 API tokens - one is issued per user, per app - making the original no longer open for additional users. Plus is available only on Lollipop devices, making it functionally different. Owners of the original app will be receiving a (mostly) equivalent update to 4.0.

Here is the full changelog:

And that's just the list of new features. There are a bunch of fixes which can be found in Settings -> What's New inside the app.

The ripple feedback definitely rounds out the Material Design feel of the app, which is really coming into its own now. I have made it my full-time Twitter client, taking the place of Plume, which I have used for years.