As winter slowly loosens its grip on the northern hemisphere, gadget nerds everywhere poke their noses above ground, looking to see if we'll soon have new hardware to drool over or six more weeks of relatively stale news. Easily the most anticipated springtime hardware announcement of the last few years has been Samsung's annual flagship refresh, and it looks like that will be coming on March 1st. The South Korean manufacturer has sent out invitations to its next "Unpacked" event at Mobile World Congress. 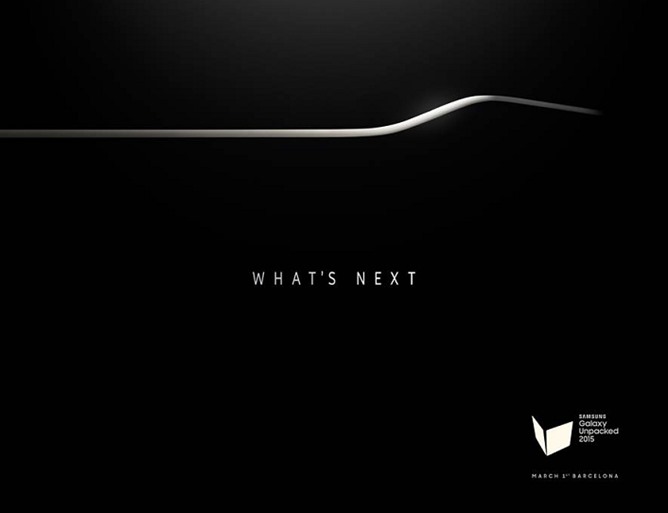 Technically Unpacked isn't a formal part of MWC in Barcelona - Samsung secures its own venue for the announcement and invites press separately. But since it will be in the same city and it will take place the night before the show officially begins, Samsung is certainly hoping to get ahead of the PR blitz for what has become the world's largest display of mobile tech. We know very little about the next high-end phone from Samsung (presumably the Galaxy S6, but that hasn't been confirmed), and the invitation doesn't give up much else. We see a curved line that might be the edge of a phone, or the back of a phone reminiscent of previous designs with a trademark "Galaxy bump," or a new Gear wearable device, or... anything, really. The "what's next" caption is appropriately nebulous.

The image was first posted to a Vietnamese forum before being picked up by the usual suspects. South Korean business publications have indicated that Samsung is dropping Qualcomm chips in favor of its own Exynos designs in the next major Galaxy phone, but that too is unconfirmed. Expect to see the usual parade of leaks increasing in frequency as Mobile World Congress gets closer.

Samsung has made the next Unpacked event official on its Tomorrow portal.