The name "Naughty Kitties" is not particularly descriptive. Is it some sort of game or a seedy strip club? It's a game this time, and actually a rather fun one. It bills itself as a combination of endless runner and tower defense, but it's more strategic than you might think.

Gameplay consists of a flying battle with alien invaders above the Cat’s Planet. Your craft can accommodate a few battle cats at a time, but they get tired (cats sleep a lot), so you have to keep swapping them out to do battle with the aliens. When your ship runs out of life, it's game over. You basically just try to get as far as possible by changing up your cats at the right time. That's the endless runner aspect, and the cats are sort of like towers (that sleep and purr and stuff). 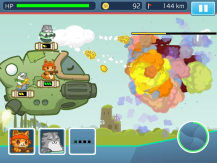 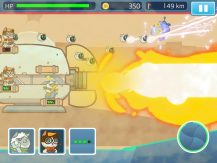 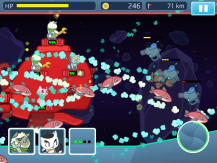 Over time you'll unlock more cats, ships, and abilities. This is a free game, so some of that unlocking will push you toward in-app purchases. However, they top out at $19.99. When a lot of free games offer $100 IAPs, that's downright honorable behavior. Microsoft Invests Some Of Its Millions Into Cyanogen Inc.