Microsoft's Word, Excel, and PowerPoint apps have been in preview on Android for a few months, first as an invite-only preview then as an open one. Now Redmond appears to be moving forward with the real deal—the preview label is gone, and the final versions are rolling out. 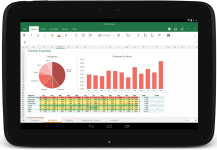 You can download the apps now on almost any tablet (but no phones) for free. The device needs to have at least 1GB of RAM and an ARM processor of some sort. It officially supports Android 4.4, but Lollipop should work too. Simply sign in with your Microsoft account to create files, print, and do basic editing. An Office 365 subscription is required for some premium features, though. The three new apps join OneNote, which has been available on Android (phones and tablets) for some time.

Microsoft hasn't detailed any specific changes it made in the final versions, but presumably there have been some bug fixes and things of that sort. Also note Intel support is currently missing, but is planned for later this year.