Update: Pre-order registrations have been extended "due to high demand," until Monday February 2nd, 12pm MST. Beside the $50 discount you get for registering, you'll also receive an extra battery and a glass screen protector. Pre-orders should open on Monday, but the discount and freebies will be gone then.

Beside Energous, the most novel company I met with at CES 2015 was Saygus. Here was this start-up I hadn't heard about touting a superphone of sorts, with bells and whistles to rock most bells and blow most whistles, an unconventional product that seemed, on paper, more hallucinogenic than the most optimistic crowd-funding project you've come across. But my time spent with the Saygus team revealed a bit more to the story.

The company had been creating innovative technologies for smartphones for over a decade, but thought it was time to try its hand at making its own device. Mass market appeal wasn't in the cards, replaced by the drive to push the envelop and see how many cool features — and novelties too — could be crammed into the phone to grab the attention of an elite, decidedly geekier, clientele. What OnePlus did for the affordable but powerful smartphone market, Saygus seems to want to do for the demanding technophiles. That's where the V² got its roots. 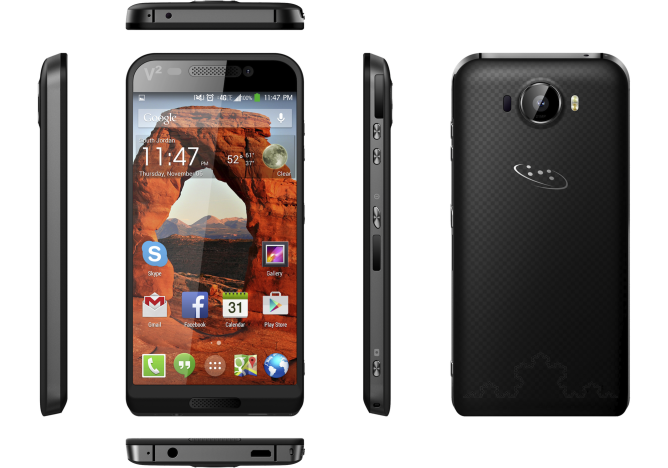 The V² is an upper mid-range device by 2015's standards, but the phone isn't trying to compete on the "standard" featureset to begin with. It starts with a 5" 1080p display with Gorilla Glass 4, 3GB of RAM, 64GB of on-board storage, a 2.5GHz Qualcomm quad-core processor (most probably the 801), a 21MP camera with OIS and a physical shutter button, and adds the usual features we expect in modern smartphones like GPS, Wi-Fi, NFC, LTE, Bluetooth 4.0, and MicroUSB with OTG and MHL support. The V² also has an IR transmitter and powers everything with a decent 3100mAh battery and Qi charging. Not a bad spec list, but definitely not an earth-shattering one either. 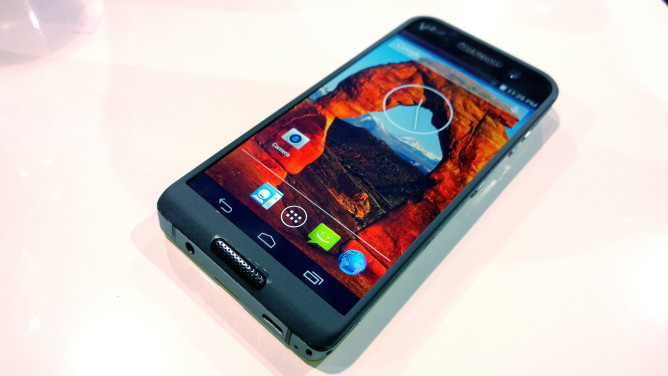 Where it gets interesting is with the specs that we usually don't look at, or the ones we are trained to glance over and not expect anything from. That's where Saygus is trying to differentiate. Some of these could be very useful, others sound intriguing to say the least, and a few seem like they were added because the company went all-in with every novelty it could find. 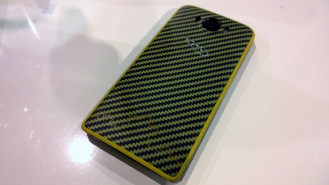 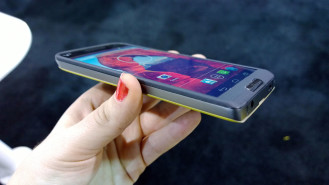 The front camera is a 13MP auto-focus sensor with OIS — selfie lovers rejoice! 2 MicroSD slots are found under the battery cover, both with support for cards up to 128GB — 320GB of total storage anyone? A light sensor sits on the back of the phone as well as the front, to grab as much ambient light data and enhance the screen's brightness control. Speaking of the screen, it's an edge-to-edge one, there are no visible black borders — whether the display itself doesn't have them or the designers were smart enough to conceal these behind the phone's Kevlar side borders, I couldn't tell. 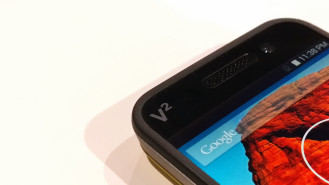 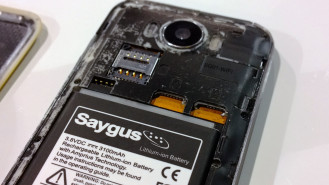 Kevlar isn't the only material used, there's fiberglass and anodized brushed aluminum too. The phone is waterproof with an IPX7 rating, with no covers on any ports. There are two front stereo speakers and three microphones (for better noise reduction), all with Harman Kardon's sound technology. 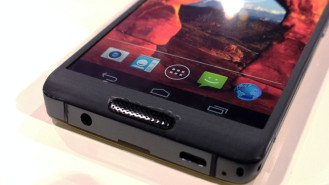 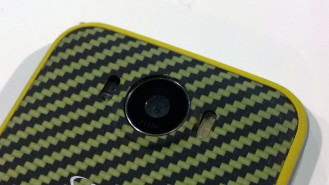 Left: front speaker. Right: light sensor next to the camera.

Moving onto the cool novelties, the V² has a fractal antenna built into the battery cover to enhance its signal reception. It's the first phone to support 60GHz wireless gaming and beaming to televisions. A biometric fingerprint scanner is flanked onto the side for privacy and security. And lastly, the phone has a power-saving chip that enhances its battery's endurance by 50%. If this isn't the most intriguing set of specs you've seen on a modern smartphone, I don't know what is. 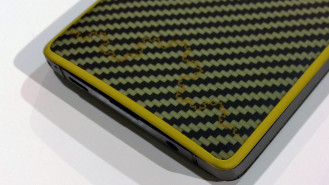 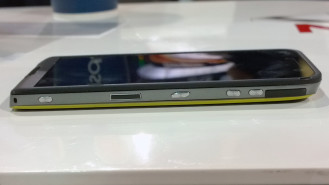 My short hands-on time with the Saygus V² (pronounced V-squared by the way, and not V-two) wasn't enough to test most of these features. The engineering samples present at CES weren't exactly market-ready (you can clearly see the flaws from the photos) and seemed to have been flashed with a CM11 ROM that wasn't yet optimized for the hardware's additional features. Speaking of, the V² is supposed to ship with KitKat 4.4.4, a mistake as I argued with the team, especially if one of their main selling points is the dual MicroSD slots. Lollipop would be better suited for that. On the plus side, the phone should be rooted or at least root-ready out of the box. 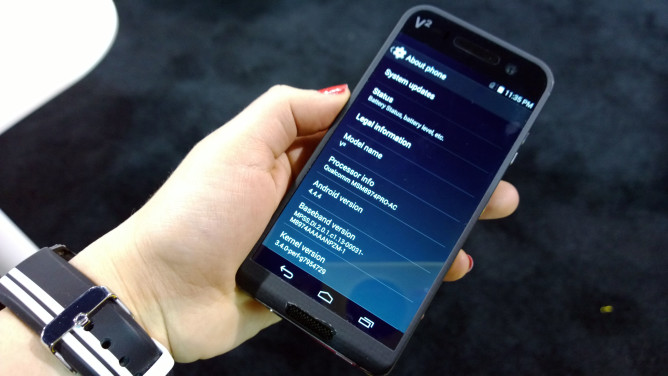 But back to the hands-on, the phone exists and works. There's that at least to quell my inner doubts of this being an elaborate bluff, the result of someone's delirium, or a madly optimistic project. The rest, from the battery-optimizing chip to the wireless gaming, biometric scanner, speakers, microphones, MicroSD slots, cameras, fractal antenna, and everything else that forms this psychedelic mix of specs, has to be tested thoroughly and proven once we get a device to try for a longer period of time.

And I do realize how sad it is that I consider this featureset "psychedelic," but we've been trained and groomed to the status-quo of the mobile industry for such a long time that anything slightly out of the ordinary disrupts our set ways. Wait, you mean there's more than a bigger higher resolution screen, faster processor, and better camera?! What an obscenity!

If the Saygus V² sounds like the kind of phone you might want to put your dough on, pre-order registrations are already available on Saygus' website and will continue to run until today, 12pm MST (that's 2pm EST, 11am PST). This will guarantee you a spot in the line once pre-orders are actually open and a discounted price of $549 as opposed to the phone's regular price of $599. It's not clear whether the discount will remain after 12pm, so if you're uncertain, you might as well register your email address to be on the safe side. Exact payment withdrawal times as well as shipping dates and details should be announced later today. We'll update the post once we know more.