You're a busy person. You've got work all day, groceries to buy during lunch, and kids to pick up after piano practice. (Football? Yeah, let's make it football practice.) The last thing you want to do is schlep across town to drop off that blender for your sister's party next week. Wouldn't it be better if you could just send somebody else to do it? A new service called Roadie is looking to turn everyday commuters and travelers into a network of couriers ready to take just about anything across town, or across the state.

The idea is very similar to ride-share services like Lyft and Uber, but oriented towards moving inanimate objects from point A to point B, rather than humans. Senders post details about pick-up and drop-off locations, size of the cargo, and when a delivery should be made. Drivers, referred to as "Roadies," can look through these offers and pick the ones that interest them. In theory, this makes it possible to arrange deliveries at specific times, on weekends, or with other criteria that aren't always possible (or reasonably priced) with established shippers like UPS and FedEx. As an added advantage, the Roadie app provides real-time location tracking for the sender and receiver, so you'll always know exactly where a package is.

Roadie is still very young, having just secured an initial round of investments worth $10 million. The company is currently limiting itself to servicing just the southeastern United States, but it plans to expand to the rest of the country fairly soon. There's not even a web interface, so users are limited to the mobile apps on iOS or Android, for now. 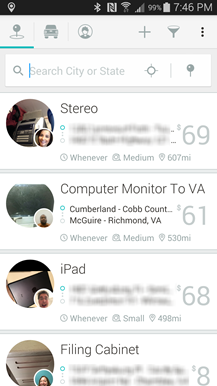 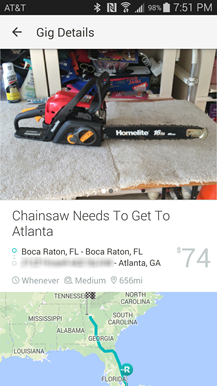 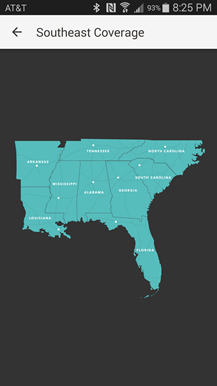 Creating a gig is pretty simple; it only requires a little bit of information about what is being sent, how big it is (i.e. Small, Medium, Super Long, Large, and Elephant), pickup and drop-off locations, who the driver will meet at each side, and when the package should arrive. Scheduling options for the drop-off are still a bit limited, but allow for picking a time for same-day deliveries, a specific date in the future, or just "whenever." Additional details about the pick-up and drop-off can go into the gig description.

Roadie doesn't allow senders to choose how much they're going to offer for a gig, but instead calculates a standard fee based on size and travel distance. The price difference between small and elephant is pretty trivial. In fact, it seems every size category is the same except for elephant, which nets an extra $10. Roadie claims 20% of the payment for itself, and then takes an additional $1 for a "Safety Fee," which is basically insurance for stolen or damaged items. The rest goes to the driver. Aside from the $1 for insurance, this precisely matches the payment structure for Lyft, albeit with a different cost per mile. 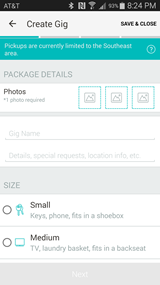 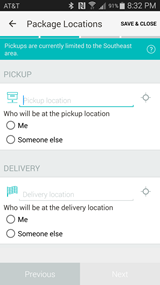 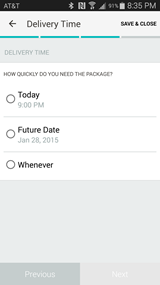 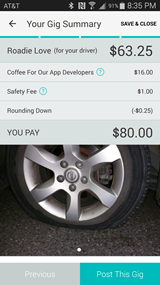 Of course, this whole thing can't work without drivers, and the app is there for them, too. The Roadies need only provide a valid driver's license and insurance information to get started. Unfortunately, searching for gigs is still a bit glitchy, particularly when attempting to filter the list. Most of these issues will probably clear up after a few bug fixes, but there are a couple of weak points Roadie should focus on. Filtering gigs based on location doesn't appear to include cities you'll be passing through on your way between two distant points, which probably means drivers aren't likely to find senders in smaller cities.

In addition to money, Roadies also have some other perks to look forward to. The company says that roadside assistance is available for all drivers. There are also plans to bring special promotions to drivers, but there aren't any further details about what that means, yet.

The whole deal should be pretty attractive to drivers, since pick-up and drop-off shouldn't take up too much time, and the payouts look pretty good. The roadblock may be senders. To have a package delivered across town won't cost too much, especially compared to the typical courier services in dense cities like New York; but that also means the payouts aren't going to convince as many drivers to go out of their way. On the other hand, the prices quickly outpace regular shippers like UPS and FedEx if a parcel is meant to travel longer distances – you may want to forget about sending anything to another state. It seems a little crazy that it should cost nearly $100 to carry something like a locket from Miami to Atlanta if the driver just happens to be making the trip.

If you want to make a quick buck carrying things back and forth for strangers, or maybe you want to get a package delivered on a weekend, check out Roadie. Again, it's only available in the southeastern states while the company works out the kinks. The app is available on Google Play and Apple's App Store.

Roadie Is Ride-Sharing For Packages, Now You Can Fulfill Your Dream To Deliver Packages Like The UPS Guy

Roadie Is Ride-Sharing For Packages, Friendly Strangers Are Standing By To Carry Your Stuff To Other People 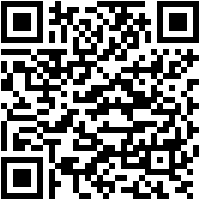 atHandTuner Is A Wearable Instrument Tuner For Your Wear Watch, And It Works Really Well

Runtastic Running And Fitness App Gets The Material Design Treatment In Version 5.4