HTC One M8 owners in Europe are getting a lollipop-flavored treat. That's right, Android 5.0 is now hitting devices across the pond. We have multiple layers of confirmation on this one. For starters, HTC senior communications manager Jeff Gordon had this to say earlier today:

Respected ROM developer LlabTooFer followed up later with more specific information. The update version number is 4.16.401.10, and it comes in at 780MB.

Then someone who received the update tweeted out an image that confirms the version number and file size mentioned above. 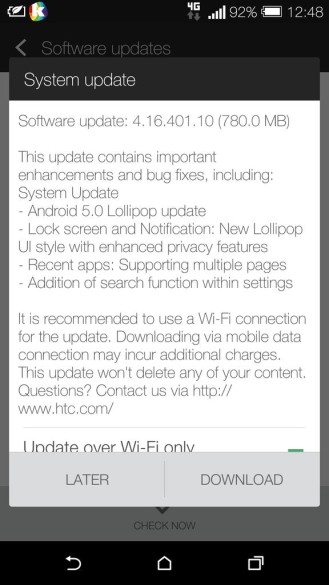 This screenshot provides a changelog, showing that the update does indeed make the leap to Lollipop and that HTC has added in some visual tweaks, such as modifications to the lock screen and notification shade. Switching between recent apps has changed into something that looks more in line with stock Android. You can get a look at these changes in our post about a previous leak.

This update appears to have been rolling out for much of the day, so if you haven't received it yet, now would be a good time to check.