Here's an interesting choice, high-end smartphone fans. An eBay vendor is currently selling both the flagship HTC One M8 and the small but premium Samsung Galaxy Alpha for $299.99 each. Both are off-contract phones with AT&T radios, both are 32GB versions, and both are manufacturer refurbished. Both come with free economy shipping and no sales tax outside California. Either one would be a solid choice for any deal-hunting Android fan, but the devil is in the details. 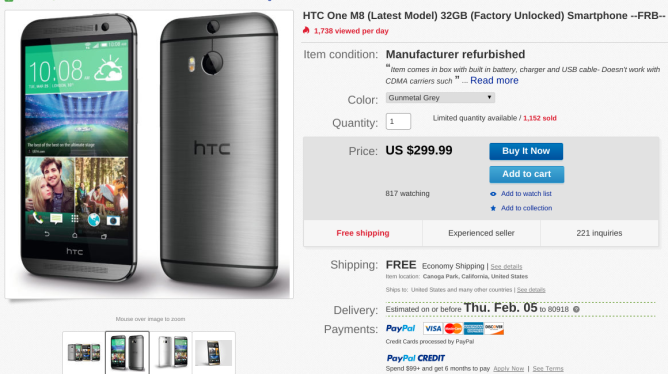 The HTC One M8 is the clear choice if you like your screens big and dense, thanks to its 1080p 5-inch LCD. It's also got an objectively tougher body featuring metal all around. The biggest distinguishing factor is probably the HTC Duo "ultrapixel" camera on the back, though mixed results in reviews don't necessarily mean that it's a plus. Both phones use a Snapdragon 801 processor, 2GB of RAM, a MicroSD slot, and KitKat with a planned software upgrade to Lollipop.

Personally, I'd go with the Galaxy Alpha. Though its AMOLED screen is only slightly smaller at 4.7" and considerably less sharp at 720p, Samsung's engineers have managed to make a seriously tiny phone around it. It's also considerably more premium than similar Samsung devices thanks to a real metal frame (something the Note 4 would later adopt), but it keeps access to a removable battery. The ergonomics of the phone are appealing as well - the little flare in the corners lets you hook a finger around the edge quite snugly.

The refurbished One M8 is being offered in grey and silver (gold is out of stock at the time of writing) and the Galaxy Alpha comes in white or black. International readers, you can buy one for yourself... so long as you're not in "Africa, Asia, Middle East, Southeast Asia, South America, Mexico, Cyprus, Czech Republic, Greece, or Ukraine." Ouch. This is the lowest price we've seen on either phone, so expect supplies to drain quickly.