Basically, T-Mo customers can pay $5 a month to join SCORE!. After six months, they're eligible to get a free entry-level smartphone, like the Alcatel ONETOUCH Evolve 2 (that name lol). If users are able to hold off for 12 months, they're offered even deeper discounts on all T-Mobile smartphones. The example given in the press release is $150 off the Samsung Galaxy S5, which really isn't too bad - that's a $150 return on a $60 investment. I wish I could trade all of my $60 increments for $150 increments. I would have a lot more dollars.

Here's the cool part (I mean, the whole thing is kinda cool, so I guess this is the cooler part? Or another cool part? Whatever): this program is also available to customers on T-Mo's Simply Prepaid plans. So, basically everyone who plays for Team Magenta can save some dollars on new phones. Not bad, Legere. Not bad.

I couldn't find a good image for this post, so here's a picture of Legere in a banana peel. 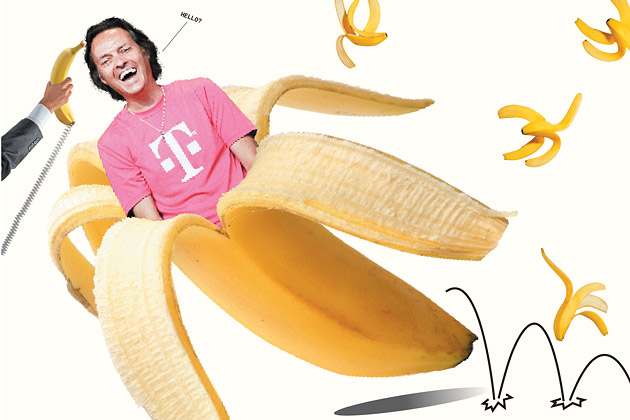 [Weekend Poll] Do You Pay For A Music Streaming Service? Which One?