Update: After posting this, we heard from employees who work for authorized retailers, as well as customers who verified that this was not a freak thing. These Galaxy Tab S 8.4 LTE models for Verizon were, in-fact, sold in very limited quantities.

From the evidence available, it seems that some indirect, non-corporate retailers received stock around the 2014 holiday season and were almost always selling the tablets for $99 on contract. It appears that they are mostly sold out now, and no one can get more. What could have happened here is that Samsung might have manufactured a certain number of these before Verizon decided to discontinue the launch. Instead of being left with a whole bunch of tablets to be destroyed, Verizon probably sent them to the indirect retail channels to try and recoup at least some of their cost.

Further, it looks like there is a later firmware available for this particular variant, as SamMobile has an "NK1" build in their database. This is pretty up-to-date and is the same build number that the AT&T 8.4 and 10.5 are running as well. Currently, I'm unable to verify whether or not the firmware is official release software or just an engineering build, but if I get some concrete evidence, I'll update further.

If you're interested in getting your hands on one of these, you might try your luck on eBay, Craigslist, or Swappa, but don't hold your breath. It doesn't sound like there are a whole lot of them out there. Also, as with Verizon's 10.5" variant, these 8.4" models are only available in white. - Shawn

Back in September, the four major US carriers started launching their own LTE variants of Samsung's flagship Galaxy Tab S line. While they all offer the 10.5-inch incarnation for sale, only AT&T brought the 8.4-inch variant to market. What was interesting about this was that Verizon also had an 8.4 model (SM-T707V) in the pipeline. It passed through the FCC, but for whatever reason, it was never launched.

Fast forward to December 1, XDA user docchaos found a non-corporate Verizon Wireless authorized retailer who was offering the Galaxy Tab S 8.4 LTE for $99 on contract if you bundled it with the purchase of a new phone. After jumping on the deal, he realized he had a unicorn. Officially, Verizon does not offer this device for sale and you'll find absolutely no mention of it on either Big Red's or Samsung's websites. While this whole situation is notable in itself, what will really make tech enthusiasts envious is that this vaporware Verizon model has a Snapdragon processor, where AT&T's is rocking an Exynos. 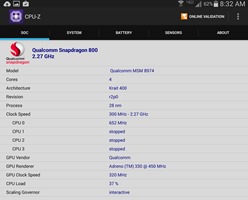 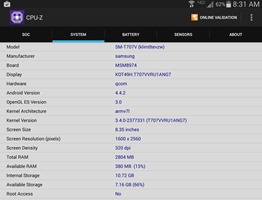 One interesting point about the software on the tablet is that it's pretty old. In Samsung's build code, NG7 would date to July of 2014, which is right around the time that the Wi-Fi versions launched. I would venture to say that unless these ever get sold by Verizon, or the carrier at least acknowledges it in some capacity, there will probably never be an official software update for it. Maybe if the owner is lucky, he'll be able to find a way to get a custom ROM on it.

How exactly the retailer managed to get these in stock, and whether or not Verizon plans to sell them in the future, remains a mystery. If these ever do become commonplace, though, it would probably be the more attractive one for tech enthusiasts as compared to the AT&T model because of the Snapdragon processor and support for both GSM and CDMA.