Google's compatibility definition document (CDD) is meant to provide guidelines, requirements, and recommendations to Android device manufacturers who want their devices to be "compatible" with the latest release of Android, allowing them to pass Google's Compatibility Test Suite.

Last time Google updated the document, we noted at least one change of interest, requiring that manufacturers use white status icons with translucent bars. Naturally, when we noticed Google had updated the document again, we had to take a look and see what changes had been made.

There are lots of changes in the new document, but the following are a few of the more interesting ones. We'll link the original document at the bottom for anyone interested in having a look.

First up, Google has added suggestions for all the new device types introduced with Lollipop. "Handheld" refers to phones and tablets, while Television, Watch, and Other have been added to the list. The table below shows a very basic overview of what input/output, sensors, and connectivity are required for each category. 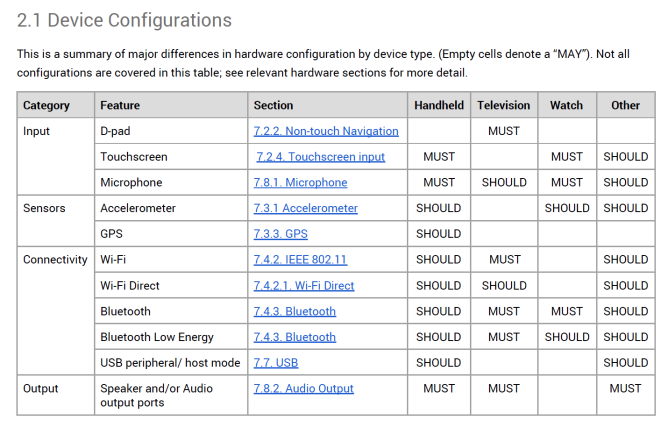 Where watches are concerned, Google says screen sizes must be in the 1.1-2.5" range with a 1:1 aspect ratio. Watch and television devices alike have some flexibility that handheld devices don't.

Things like Daydreams, a recent activity overview, and dedicated web browser are all optional on both form factors (for obvious reasons), though televisions are uniquely required to have universal search, while it's just recommended for other device types.

Televisions are also required to support d-pad controls, along with some common controls, like those found on the Nexus Player's controller (ABXY, shoulder buttons, etc.).

Back on the topic of the activity overview screen, Google notes in the CDD that the overview button is optional. When there is an overview button, Google encourages using the "upstream" version (from stock Android). If manufacturers want to change the interface, Google has some guidelines including how many tasks should be displayed at once, and what kind of information/coloring should be included. 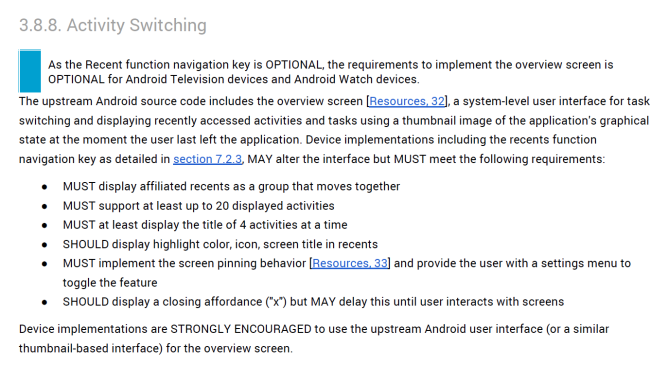 Elsewhere in the document, Google notes that devices with a lock screen must support full-disk encryption, with new devices of course having encryption enabled by default.

Google also requires that devices support Android's new Material theme, without altering any of the theme's attributes that are exposed to applications. This section of the document also re-emphasizes the importance of keeping white status icons to maintain a consistent experience, particularly when developers make use of colored status bars. 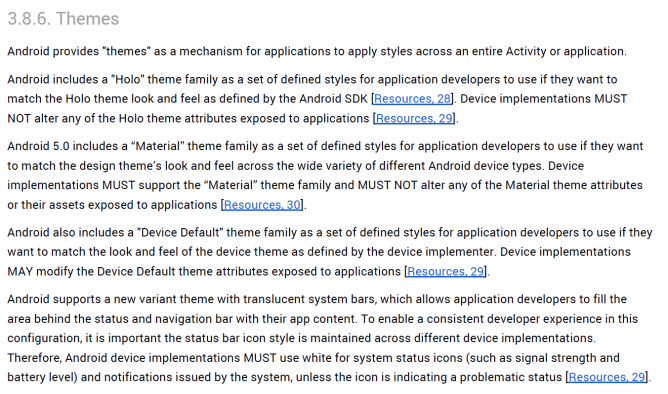 Google has updated its definitions for UX consistency too, giving specific requirements for frame latency, interface latency, I/O access performance, etc. The old CDD, for instance, only recommended that re-launching a running application should take less time than the original launch, while the new CDD pins that time down to one second or less. 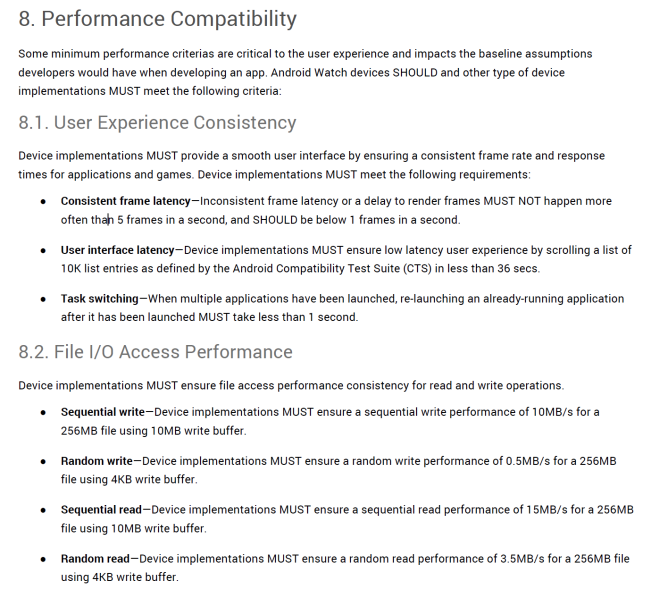 Of course, at 68 pages (not including the cover), the document holds many other notes and recommendations, including requirements for audio latency, camera behavior, etc. There's even a full document changelog at the end for those so inclined. Just hit the link below to look for yourself.

CyanogenMod 12 Has A New Boot Animation And It Is Very...White

[Weekend Poll] Do You Pay For A Music Streaming Service? Which One?