Samsung's forays into Wearable technology for the consumer market haven't been very groundbreaking, and a few never even touched down. Perhaps the secret was to aim higher than heart rate trackers and smartwatches. A small team at Samsung has been working in the company's Creativity Lab (a.k.a. C-Lab) developing a headset capable of observing brainwave patterns for signs of a stroke. Not only could the system help millions of people each year to prevent a crippling or fatal stroke, but the technology may have applications for monitoring the heart and brain for many other conditions.

The project began two years ago when the project lead, Se-hoon Lim, and 4 other engineers from the smartphone and washing machine divisions came together with the goal of an early warning system. The team worked with neurologists to develop the Early Detection Sensor & Algorithm Package (EDSAP), a bundle of sensors capable of recording and processing brainwave data. Similar systems found in hospitals and research centers usually take upwards of 15 minutes to collect enough data to make a diagnosis, but Lim says EDSAP can achieve the same results in as little as 60 seconds thanks to the algorithm developed by Jangbeom Yang, a software developer on the team. 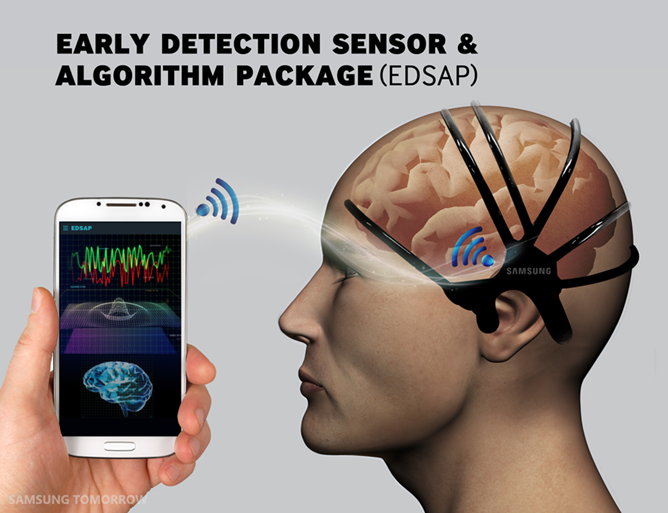 Lim suggests that the EDSAP sensors can be made small enough to be worn comfortably and discreetly on the backside of more traditional objects, like hairpins or on the arms of glasses. The sensor package, as it stands today, can be fit into a light-weight headset that can be worn comfortably without the use of loose wires and electrodes. This was made possible by the discovery of a highly conductive, rubber-like material. As a result, the headset is sensitive enough to collect data without special solutions on the skin or in the hair.

The current headset model is designed to communicate with a smartphone or tablet to give users a convenient and familiar interface for examining results. If this technology can ultimately become a set of small, easily hidden sensors for long-term wear, it's possible that we may even receive warning notifications on our phones as soon as a red flag is detected. It sounds pretty cool, albeit a little creepy... annnnnnnd, pretty depressing. After all, that's a notification nobody is eager to see. However, before we see any of this, the hardware must go through an extensive testing and certification process. It sounds like it will be quite a while before something like this reaches medical professionals, and probably much longer before the general public can take it for a spin.

The team plans to extend the functionality of EDSAP to detect other neurological conditions like depression, but the possibilities are seemingly endless. Of course, the technology can also be applied to other parts of the body, particularly the heart. Lim is already looking into using the sensor array to produce electrocardiograms. Since the electrical pulses from a heartbeat are substantially stronger and even easier to record than brainwaves, it should be simple to apply the same mechanics.

Samsung is surely eager to see EDSAP mature – this technology will result in a whole new product line and countless high value patents. Still, it's inspiring to see that we're not far away from a technology that may be able to save millions of people from one of the most catastrophic medical conditions known to our species, particularly one that doctors can usually prevent with a little warning. The implications to healthcare and the medical field are pretty huge.