Samsung and Qualcomm have been reliable partners since the rise of Android, to the mutual benefit of both the phone maker and the OEM chip supplier. But according to this report from Bloomberg, that relationship has hit a rocky patch as Samsung prepares its next flagship phone, presumably the Galaxy S6. An anonymous tipster told Bloomberg that Samsung will decline to use a Qualcomm chipset for the phone after poor testing of the Snapdragon 810, the OEM's top-of-the-line processor. 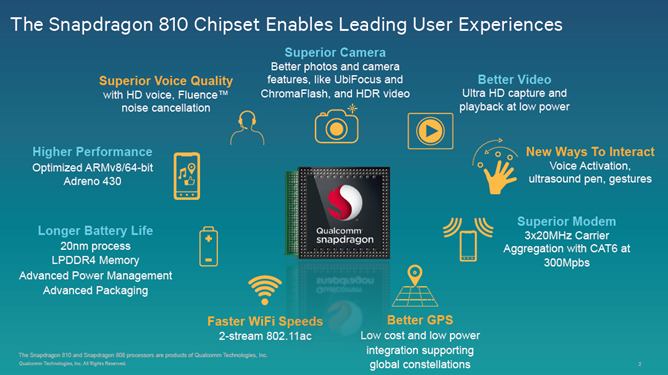 According to the report, Samsung has found that the 810 often overheats during testing, causing the company to choose its own line of Exynos processors instead. That isn't overly surprising in context; Samsung tends to push its chips wherever it can, particularly in Wi-Fi only devices where an integrated cellular radio isn't necessary, like most tablets. In previous generations models of the Galaxy S phones were sold with both Samsung and Qualcomm processors, Qualcomm being used for phones with LTE capability. It's possible that Samsung intended to use its own chipset anyway - this is an unconfirmed report, after all. The report doesn't say which chip the Snapdragon might be replaced with, but the Exynos 7 Octa series is the latest one to be announced, and uses similar Cortex A57 and A53 CPU cores.

The Snapdragon 810 is the latest processor from Qualcomm currently being offered to manufacturers. It uses a 64-bit, octa-core (4x2) architecture with primary cores running up to 2.8Ghz, and Qualcomm's Adreno 430 GPU is included on the chipset. While no consumer products with the 810 have reached the market yet, the Xiaomi Mi Note Pro will go on sale later this month in China and the LG G Flex 2 should be available sometime during the first quarter. Last month a report from Business Korea reported overheating and other problems with the Snapdragon 810, which could lead to issues for flagship phones from Sony, Samsung, and LG.

Qualcomm is faced with hard-to-solve problems. The Snapdragon 810 overheats when it reaches a specific voltage. It also slows down owing to problems with the RAM controller connected to the AP. In addition, there is an error in the driver of the Adreno 430 GPU.

This report also comes from an anonymous source, so consider it unverified as well.

Qualcomm is the largest mobile processor supplier on the planet, and most of its manufacturing customers don't have their own chip factories to fall back on. If Qualcomm's latest top-of-the-line chipset is a dud, it could create a tempting chance for competitors like Intel, NVIDIA, and MediaTek to grab a chunk of marketshare. The company's stock has already taken a small hit based on this morning's news. Both Samsung and Qualcomm have, of course, declined to comment.

BBC News App For The UK Gets A Complete Material Overhaul