In the realm of wall-tethered wireless speakers, there isn't a great shortage of high-end brands. B&O Play, Sonos, and Bose are probably getting the lion's share of revenue in this space, considering the absolutely bonkers prices of some of their products. They all offer something, too - with B&O, you buy into the striking European style of Bang & Olufsen. Sonos offers a unified, proprietary communication protocol with good platform support and a variety of speakers and price points. And Bose offers the Bose name, which as I recall did mean something circa 2003 daytime TV infomercials (I kid, I kid - sort of, their connected speakers look terrible).

Once you start diving down below the $400-500 range or so, though, compromises quickly start appearing. Wall-tethered units actually dry up pretty quickly below this price point, unless you're talking glorified clock-radios that probably haven't seen much changes aside from Bluetooth and an iPhone dock delete in the last few years. Admittedly, it's probably because demand for them is plummeting - portable, battery-powered Bluetooth speakers are all the rage, and there's no fussing with cables.

Some of us, though, would like something - just one speaker - for the living room or the bedroom that won't be getting moved often, but isn't just a tarted-up bedside speaker dock. And we'd prefer it A.) not be exceedingly ugly (perhaps even, dare I say, attractive!), B.) have a variety of [open and closed-protocol] connectivity options, and C.) sound genuinely good.

Now, at $600, the Marshall Woburn is probably already too pricey for many of us, myself included, but hear me out: this is as low-compromise a premium Bluetooth sound system as I've ever seen. It's also the best-looking, by far. 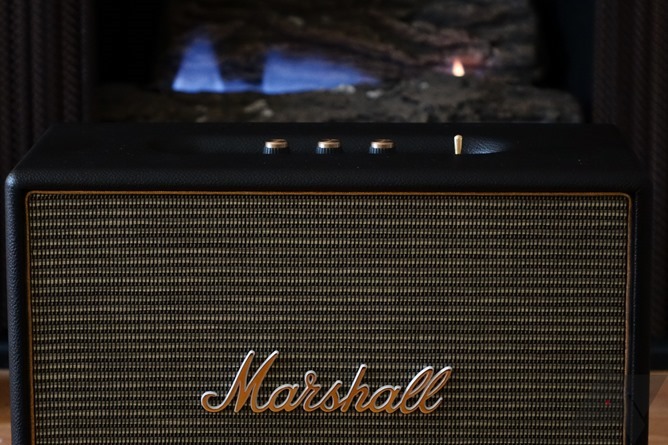 The basic styling is aped from Marshall's iconic stacks, but it's a decidedly retro take on the aesthetic - gentle, rounded corners on a smooth, vinyl-wrapped body, and a grille pattern that is intentionally distressed and uneven. While some may detest the Marshall logo's bold prominence across the front, I find it lends authenticity and character to the Woburn - this speaker is a conversation piece that can also generate the background music for the conversation. There's nothing poseur-y about the style to my eyes, either. Marshall is a highly-respected name in the music business, they're a huge part of why guitar amps look like guitar amps. Whether you approve of the style itself is a personal question, but I think this is the prettiest Bluetooth speaker on the market, hands-down. 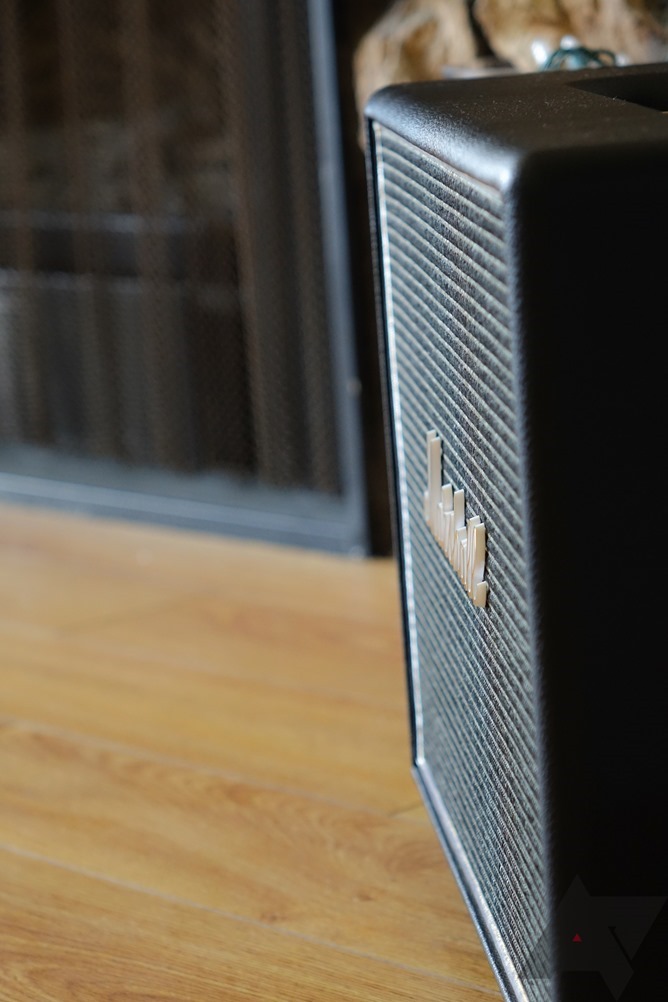 The hardware isn't just looks, though - you get real live knobs (!!!) that control volume, bass, and treble. So far as I can tell, though, these knobs aren't actually analog in anything but the sense that you can twist them - the volume clearly moves up in steps rather than along a gradient, and the same is true of bass and treble. This doesn't matter much except in one scenario - optical audio-in - and I'll get into that later. Still, it makes it seem a bit fake. Maybe just make them clicky knobs instead next time, Marshall. Or use real analog components. 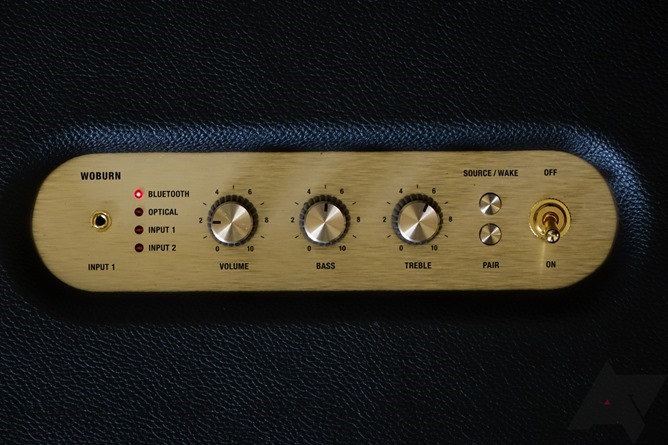 The on/off switch is an actual switch, which is fun. Who doesn't like flipping an old-school toggle switch? It clicks into place with antique authority, you half expect it to hum to life like an old tube amp, full of noise and character and hiss. In reality, it's silent - the Woburn powers on with nary a click, pop, or whirr.

And once it is on, it does rather amazing stuff. First things first: optical audio. The Woburn has an optical audio input, meaning it's a smart speaker you can actually directly connect to pretty much any modern television without needing a stereo receiver or digital-to-analog converter. Our Samsung plasma, for example, only has optical and HDMI audio out, something increasingly common on new TVs - the 3.5mm and RCA jacks are going the way of the dodo. Plugging in the Woburn via Toslink was quick and easy. The downside, of course, is that since it's digital signal, you have to control the volume directly on the speaker. There's no remote app (an oversight, in my opinion) or physical remote, either, so any time you're hooked up to the digital input you'll have to adjust the volume and tone directly on the speaker. Like, getting up, walking over to it, and touching it. Scary. 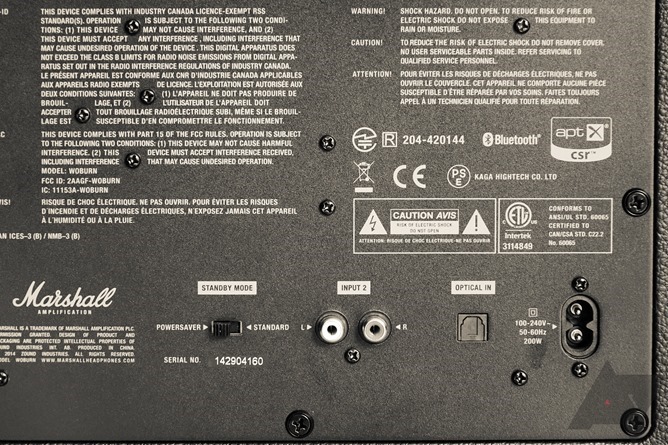 The Woburn also has both RCA and 3.5mm stereo inputs, so it's analog-ready right out of the box. Wireless communication is achieved via Bluetooth 4.0, with support for aptX built in. Marshall doesn't advertise the Bluetooth class of the speaker, unfortunately, but I found its range to be pretty good. There is no AirPlay or other Wi-Fi streaming option (this thing came out before Cast for Audio was announced) on the Woburn, which seems... weird. At the $600 tier, AirPlay is near-ubiquitous. But hey, if you really want extra range, you can plug it in to your TV, cast to your TV from your phone, and then play music out of the speaker that way - something that handy optical connection allows with minimal signal degradation.

I think Marshall (really, I should say Zound Industries, a Swedish firm - Marshall Headphones is a brand produced under license) knows that Bluetooth is the mass-adopted standard for audio streaming, though, and is probably avoiding picking a side on Wi-Fi until things settle down a bit more. To me, it makes sense, but the future is still clearly in networked audio streaming, which allows for much greater effective range and more control options than Bluetooth currently does. Bluetooth is great outside the house, don't get me wrong, but a robust Wi-Fi solution is a must if I'm laying down six-hundred big ones on a wireless speaker, even if it's something like Sonos' proprietary framework.

One lack of smartness I lament on the Woburn is in mode-switching. If, for example, you're hooked up to optical audio and in the optical input mode, you can still connect your phone via Bluetooth, but the speaker won't know to switch inputs if you start playing music on your phone, regardless of whether there's any signal on the optical input. I know other Bluetooth speakers are capable of this kind of smart switching, so I'd like to see that. Or at least a remote app to change the input without getting up off the couch. 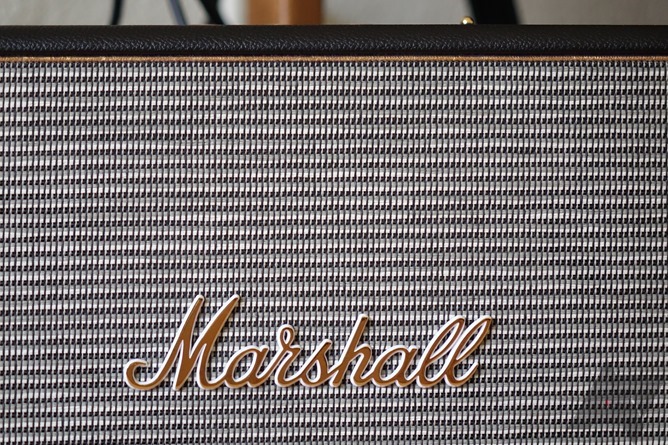 Still, despite those faults, I can't not love this speaker. And that brings me to the sound: the Woburn is outstanding. I will say it's more outstanding for music than TV or movies, though - the speaker has a warm, mid-heavy tuning that gives it a decidedly heavy, retro sound signature. Dialing the bass back and treble up a bit reduces this effect, but the Woburn is obviously tuned with rocking out in mind. There's no shortage of bass, either, as the Woburn packs two 5 1/4" woofers with two passive reflex ports on the rear. Even at 3/10 on the dial, the bass still comes through prominently. The dials are such a help, too, because with a speaker you want to tune the treble and bass to the space you're using (and your personal taste), so the ability to keep those settings locked in on the speaker itself is something I almost want to call necessary on a product at this price point. 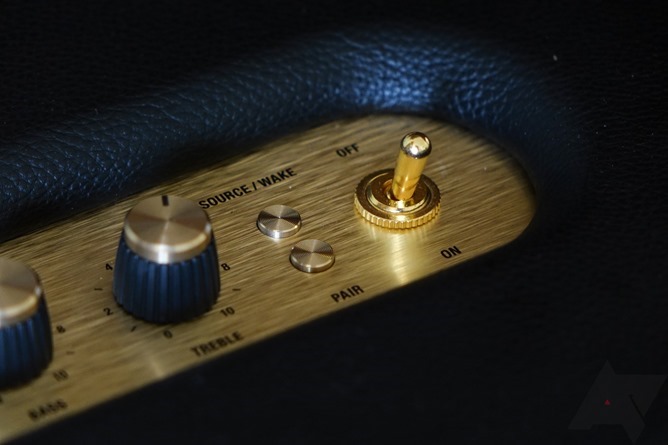 The Woburn also gets incredible loud, with a peak RMS output of 200W - it will fill a moderately-sized room without breaking a sweat. Even at full crank, the Woburn still sounds great, too, just not exactly neighbor-friendly for those of us in apartments. The clarity, depth, bass, and fullness of the sound blows any other Bluetooth speaker I've used away. While I wouldn't say the Woburn is necessarily the most detailed in terms of fidelity, it has so much more character and raw power than anything else in this segment. It is seventeen-point-six pounds of noise.

You can buy the Marshall Woburn on Amazon, where it costs $600 at the time of this review. 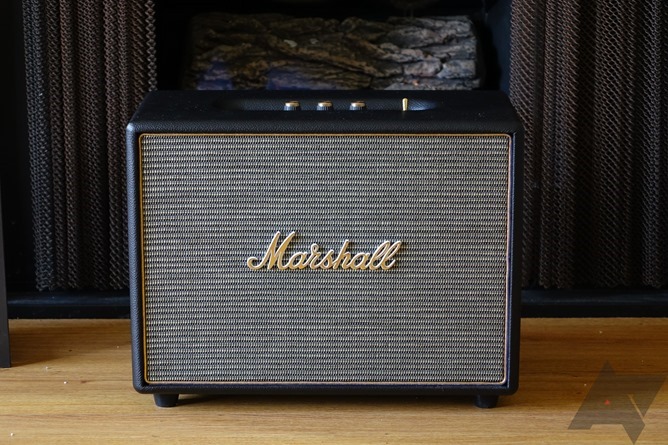 [Updated] PSA: If Your Nexus 6 Has An AT&T SIM Card, Your Android Updates Are Being Withheld, ...