Update: Plenty of readers are saying that they've received 5.0.1 with AT&T SIM cards. The decision to publish this post was made after my testing and another AP team member saying that he had yet to receive 5.0.1 on his device as well. It's possible that the rollout to devices with AT&T SIMs is just moving at a much slower pace than for ones with other SIMs, but regardless, there is still something unique going on with AT&T. - Shawn

Update 2: AT&T announced the 5.0.1 update on January 6, while other carriers were announcing it around the middle of December. That could explain why some of you have received the update and others like myself have not. If the AT&T update began rolling out officially on January 6, it would still be in the middle of a staged rollout. Since other carriers allowed the update over a month ago, those rollouts are now complete.

This probably won't come as a shock to the Android enthusiast crowd, but AT&T appears to be forcing Google to withhold updates for any Nexus 6 device that has its SIM card, regardless of where it was originally sold. We figured this was a possibility considering how many other customizations that AT&T got onto the device, but now we actually have proof.

I stumbled on this completely by accident using a Nexus 6 that was purchased from Sprint. The device came out of the box with LNX07M. It downloaded an update direct to Android 5.0.1 (LNX07M > LRX22C) and asked me to install it. Before doing that, I took the Sprint SIM card out of the phone and put an AT&T SIM in it instead. Once that happened, the Android update system removed the 5.0.1 update that it had just downloaded, and instead retrieved the older 5.0 update LNX07M > LRX21O. This clearly shows that Google is restricting updates based on SIM card, and there is plenty of historical precedent for it: 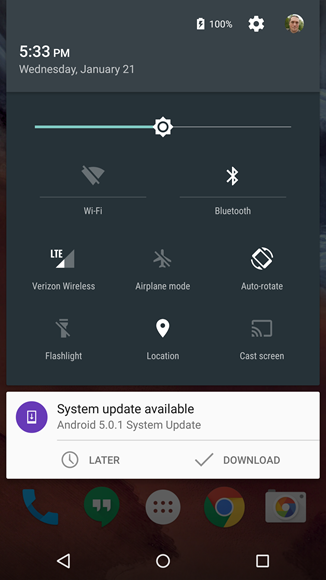 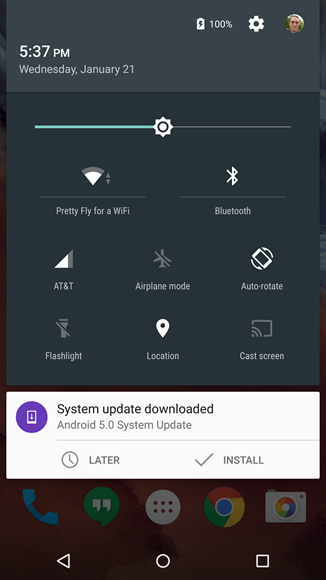 So far, it appears that AT&T is the only one doing this. After this little situation happened, I proceeded to test it with T-Mobile and Verizon SIMs as well, and in each case, the system used the 5.0.1 update. Since Sprint and T-Mobile have both launched the Nexus 6 in an official capacity, I'd say it's safe to assume that those carriers will be keeping their paws off of the update schedule. Once Verizon actually launches the device officially, we could well see updates being withheld for phones with that carrier's SIM as well, though there is presently no proof of that one way or the other.

Fortunately, this little SIM card situation doesn't actually stop you from updating. You always have the option to just flash the OTA update yourself, or put another carrier's SIM card into the device. Simply taking the AT&T SIM out of the phone will not work on its own, as Android will still assume the device to be attached to Big Blue (albeit without service) until another carrier's SIM is inserted.

Yes, this is annoying. In the end, however, the SIM check is only there to "keep honest people honest," as the old adage goes. The simple fact of the matter is that if you know enough to be reading this post in the first place, then this issue probably won't affect you in any meaningful way.

Quick Review: The Marshall Woburn Is The Cadillac Of Bluetooth Speakers