The official mobile app of the NFL is getting a few new features in preparation for February 1st's Super Bowl. Verizon customers will enjoy live streaming of the game while anyone can access news, event maps, and a variety of content for those watching and attending the big game. 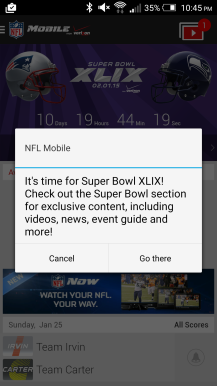 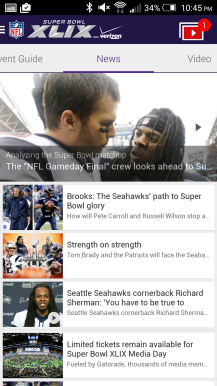 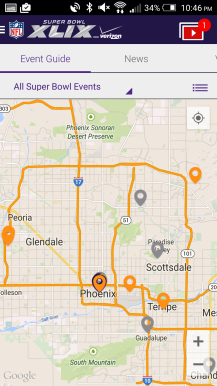 The attendee-specific features seem particularly thoughtful, with Google-powered maps that have relevant locations bookmarked built into the app. Beyond that, there is also content to answer questions about stadium policy and anything else people might be concerned with.

For non-attendees, it isn't necessarily an update that makes the app a must-download. If you have it and like it already, great. If you have Verizon, definitely jump on it if you want a different way to follow the game. Otherwise, the main addition is aggregating news that is specifically about the Super Bowl and not other NFL matters. Most people are not running low on Super Bowl news, if I had to guess.

If you aren't a Verizon customer and were hoping this update would give you access to the live video feed, you can stream the big game via NBC Sports Live Extra on your computer or tablet. The phone version of the app will not allow streaming, though.

As for NFL Mobile, you should now definitely be able to get your fix for Super Bowl news, information, and analysis if you weren't getting it already. For those of you not all that interested in football, the update claims that all ads aired on the night of the game will be available for viewing through the app. For once, ads that we want to see!