Update: Bans are occurring on at least one other 3rd-party WhatsApp client, WhatsAppMD, so it can likely be assumed that any usage of a 3rd-party WhatsApp client at the moment may get you temporarily banned, at least until workarounds are developed. According to the developer of WhatsAppMD, the fix may be as simple as changing the app signature to match the official app's. If that solution does work, you'll likely see it implemented shortly.

WhatsApp is one of the world's most popular messaging services, and with popularity comes interest from the 3rd party development community. WhatsApp, though, is now a Facebook property, and what once may have seemed like flattery is now being pursued as a TOS violation. The hugely popular client WhatsApp+ is the target of this ire, and WhatsApp seems to be taking no prisoners - WhatsApp+ users are getting 24 hours bans from the WhatsApp service, and are being directed to download the official app on the Play Store instead.

If this seems a tad draconian, that's because it is! While I think we can all understand WhatsApp's desire to maintain control of the user experience of its service, WhatsApp+ has been around for years, and users of the enhanced client are understandably furious at WhatsApp's decision to start dropping 24-hour banhammers like it's release day for a new Call Of Duty on Xbox.

Users are given a 24-hour countdown timer and directed to what appears to be an un-indexed page on WhatsApp's official FAQ , shown below. 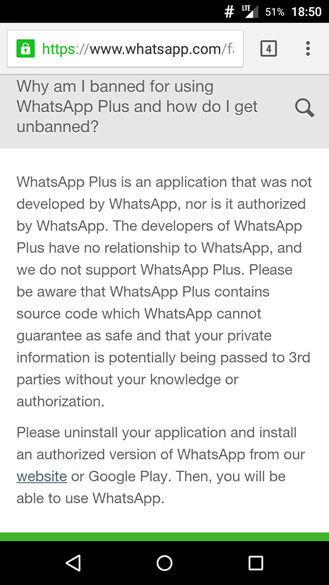 The implication of the language at the end would seem to be that continued use of WhatsApp+ will result in continued bans, so it's pretty safe to say, I think, that the app is basically dead, at least for now. WhatsApp+'s Google+ page has been updated with a statement by the page owner, saying that users should "use the normal whatsapp till a fix is found.. Very sorry for this issue as whatsapp is pushing us into a car er [sic]" - I think he means corner. Either way, I wouldn't take much solace in those words, as it sounds like WhatsApp is very much trying to shut the third-party app down for good.

I also have to say that WhatsApp's assertion that "your private information is potentially being passed to 3rd parties without your knowledge" may as well be utter and complete hooey without a proper citation - if they had evidence, they'd be a lot more specific, and I have to think they wouldn't have waited so long to act if user information really was being compromised. This sounds like straight-up FUD tactics.

A fix that would somehow spoof WhatsApp's authentication system when checking for a client version may be in the works, but such a workaround would probably just end up getting more people banned once WhatsApp figures out a new way to identify WhatsApp+ users. Given the strong language in WhatsApp's FAQ, it seems unlikely the company will reverse its stance or simply relent if WhatsApp+ does find a way to avoid whatever mechanism is tripped, though.

Google+ - thanks to everyone who sent this in.