A new HTC flagship phone is coming. You probably already knew that. But the first possible (and frankly, quite probable) look at the device came today from the folks at NowhereElse.fr, a French leak site. Two photos show the front and back of the device, which follows the general design of the One family with a couple of important differences. The photos at the original website were taken down at the request of the anonymous source... which is usually a pretty good indication that they're on to something. 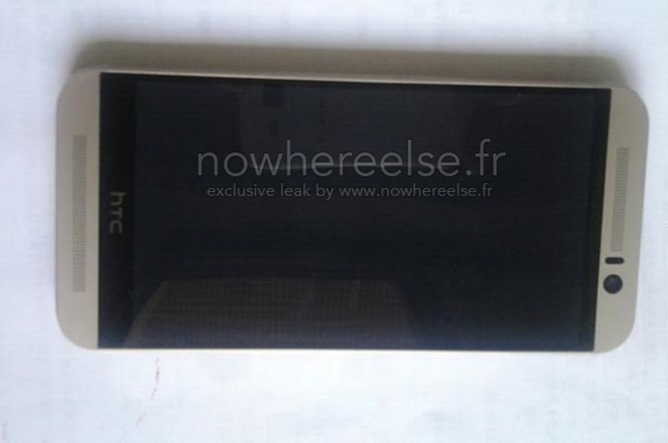 The source refers to the phone as the "HTC One M9," and though we obviously can't confirm it ourselves, it seems like a pretty reasonable jump for the Taiwanese manufacturer. The front of the phone is basically the same as the M8 with some spacing changes for the stereo speaker grilles and thinner bezels to the screen (though the HTC logo is still annoyingly present below). There is no context for screen size, but a modest bump, no larger than 5.5", would be my guess. The body is HTC's standard all-metal design with a gold finish. 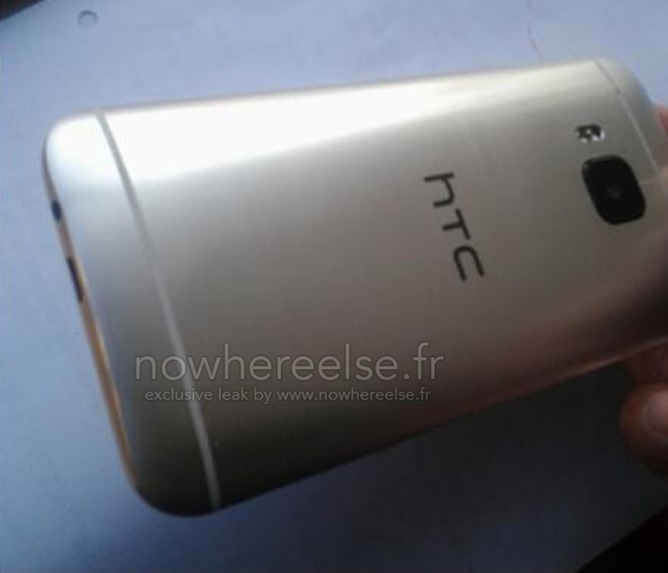 Around back things get more interesting (you, in the jacket, stop that giggling). HTC seems to have given up on its Duo camera design, to the delight of many - see the Desire EYE for the company's shift back to conventional cameras. There's only one camera in a large, rounded square module, plus a dual LED flash. Look at the bottom edge of the device and you can see that it's quite thin, though the curved back may distort the perspective somewhat. The MicroUSB port is offset to the right and the headphone jack is bottom-mounted, just like the One M8.

No specifications or software details were included in the leak, and always remember that nothing is final until the mobile executive sings. That said, it wouldn't surprise us at all if this device or something very much like it were announced at HTC's Mobile World Congress presentation on March 1st.