You would think that professional wrestlers don't need an active fantasy life. They get paid huge amounts of money to pretend to beat people up and show off unbelievable physiques on television on a regular basis. But I suppose even wrestlers like to pretend that they're superheroes (the ones that aren't already superheroes, anyway). If you'd like to play along, Warner Bros and developer NetherRealm are here with an officially-licensed WWE fighting game that dials up the more fantastic elements of pro wrestling.

In WWE Immortals, The Rock is a golem who likes to clobber things. Triple H is a Conan-style barbarian. Sheamus is an ancient shaman. Kane is a literal demon. Big Show is an Goliath-style giant. You get the picture: it's basically a retread of the popular Injustice: Gods Among Us (from the same developers) replacing the DC superheroes with re-imagined fantasy versions of WWE wrestlers. The 2D fighting system is super-simplified if you're used to console fighters, but the swipe, tap, charge, block, super attack mechanics work well enough for gaming on a touchscreen. A triple-character tag system lets you swap out fighters on the fly. 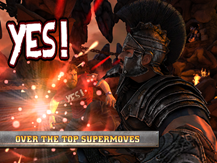 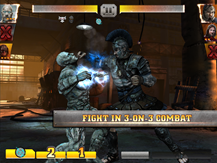 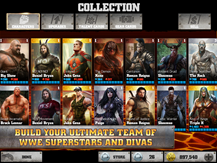 The Unreal-powered graphics in WWE Immortals are impressive, especially the fantasy backgrounds, though they don't really affect gameplay at all. As you might expect, progress is handled through a typical collection and leveling system. The two-tier currency helps you charge up your fighters and purchase new ones, and of course, spending real money will help you do so quickly (and get past the built-in grind). That sort of thing means an inherently unbalanced online multiplayer mode, but that's hardly unprecedented in free-to-play fighting games.