When it comes to IP security cameras, Dropcam is (and has been) one of the biggest names in the game. It's easy enough to use, sets up quickly, and can basically be left alone once everything is in place (most of the time, at least). That's the kind of simplicity that most home and small business owners want, which is what Dropcam has been offering since day one. Add in the fact that the company is constantly adding new, useful features to its apps, and you have a winner.

Naturally, challengers are going to come. There's clearly a market for products like this, so why let one manufacturer own it? Today, we're taking a look at one of the newest to hit the scene: Oco ($150). This camera puts the focus on simplicity and ease of use, and it lives up to that – it's one of the easiest products I've ever used. It just works.

Of course, simplicity also has its own share of drawbacks. Let's dig in. 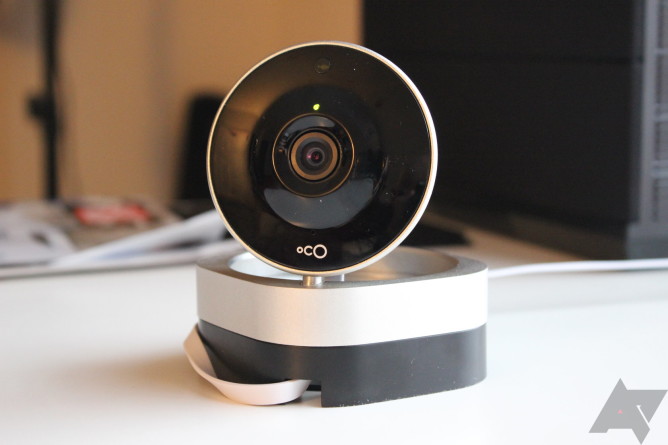 When it comes to hardware, Oco offers a wide-angle camera that can stream video at up to 720p, which should be more than enough to easily keep an eye on pets and kids, or just monitor what's going on at home while you're away. It's unique in design, however, as the camera swivels 360 degrees on a very versatile base that can either be mounted to the wall or placed on a flat surface. While it's a little bit bulky overall, I think the design is interesting and useful enough to justify the additional size. It's anything but discreet, and in this case I think that's OK. I like it.

Oco ships with everything you need out of the box – a long, flat USB cable and power adapter, mounting hardware (including drywall anchors), and of course the unit itself. There's very little to the setup on the hardware end, which is nice. I literally removed it from the box, plugged in the USB cable, sat it on my desk, and moved to the software setup. Nothing more to it.

The overall layout of the camera itself is simple enough, with the front housing the lens and light sensor, as well as the infrared and indicator lights. The speaker, mic, and reset button are all found on the back of the camera unit. All par for the course, and all laid out in a simple and intuitive manner. Really, though, it doesn't matter how it's all laid out – you're probably not going to mess with the hardware very much once it's all set up. That's the goal, anyway. It's all about the software.

The Oco is an Ivideon camera, so instead of using its own proprietary software (like Dropcam does), everything is handled within the Ivideon app. This includes setup, monitoring, and everything in between. The best part is that it can all be done directly from a mobile device, so a computer isn't even necessary.

Speaking of setup, it's so stupid simple I almost couldn't believe it. Basically, after you sign up for an Ivideon account, you plug the camera up and wait for the indicator light to blink orange. From there you put in the Wi-Fi password into the Ivideon app, select your plan, and it generates a huge QR code on the mobile device. Put that in front of the Oco, and that's literally it – once the camera reads the QR, it does the rest of the setup process automatically and you're ready to start using the camera. Stupid easy. Stoooopid.

Here's a quick look at how the plans break down:

I chose the free option. And no, you can't see my camera feed. Freak.

From there, you can start digging into the options...which I soon found to be a little too limited. That's not necessarily a bad thing, it just doesn't have some of the options I'd like to see, which I'll get into in a few minutes. First, let's take a look at what it does do. 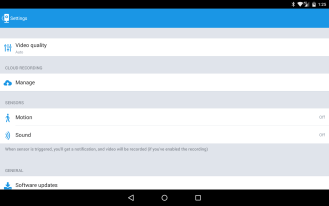 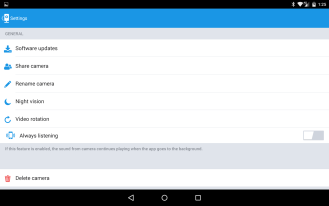 Like most things with Ivideon, the options menu is a simple place. I like bullet points, so here's the rundown: 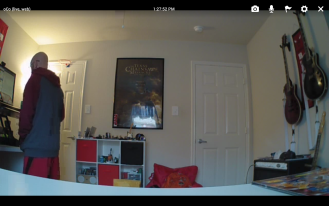 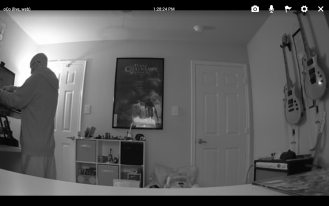 And that's pretty much it. Like I said, there's enough here to be useful, but not quite as many features as I'd like to see. For example, I want location awareness – when I'm at home (per my phone's location), there's no need for the camera to be on, so it should automatically disable. Along the same lines, I'd like for it to automatically turn on when my phone exits a specific geofenced area. I also like Dropcam's ability to name zones in a particular room, and then enable/disable detection based specifically on that criteria. That's a very powerful feature, and one that anyone coming from Dropcam to Oco may miss. But I'm getting ahead of myself here – a security camera comparison featuring Dropcam, Oco, and a couple of others is in the works for a future piece. 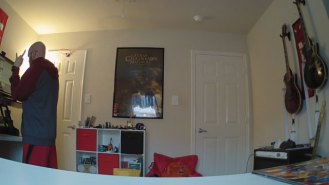 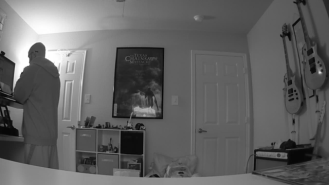 Images taken directly from the Oco. Note the small size. Also, I wish the guitars on my wall were actually white.

It's also missing a few other simple options, like the ability to disable the monitoring light. There's a small green light constantly glowing on the Oco, and the infrared lights are all on at night, as well. This makes the camera easy to spot for any would-be wrong doers. I'd like it to be a little more discreet than that.

I will say this, though: the app is fast, the camera reconnects quickly, and the latency is low (even on mobile networks). In fact, I found the latency and reconnect times to be significantly better than Dropcam, which is pretty impressive. I approve. 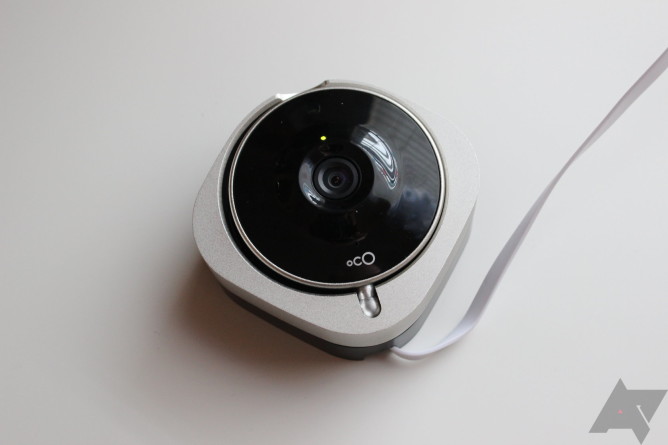 If Oco set out to release one of the easiest-to-use IP cams on the market, then I'd say it succeeded. Combine that with an intuitive, fairly feature-rich app, reasonable prices for cloud storage/monitoring, and a $150 price tag for the camera itself, and you've got a winner. Does it compare to Dropcam? I'd say yes, but like I said earlier, we're going to take a much closer look at that in the future.

In the meantime, I definitely recommend Oco to anyone looking to grab a solid IP cam that's easy to use and doesn't require constant upkeep. Hit the links below to buy one for yourself, or just get more info.

Samsung May Be Looking To Buy BlackBerry For As Much As $7.5 Billion [Update: BlackBerry Responds]