It's no secret that Adobe hasn't exactly done a stellar job at keeping parity between its collection of apps for iOS and Android. iOS users, for instance, enjoy Adobe Illustrator Line and Draw, Color CC, Premiere Clip, Brush CC, and many more that have yet to see the light of day on the Play Store.

It isn't all bad news, though - today, Adobe is bringing Lightroom Mobile to Android. The app actually has a couple of cool things to offer, but before we take a look, there are a few caveats that should definitely be mentioned.

For one, the app isn't optimized for Android tablets - Adobe says that actual Android tablet support is "on the roadmap" for the future, but didn't specify any time frame.

Intrepid users can sideload the APK onto a tablet, though the experience isn't quite what it could be, compared to its iOS tablet counterpart. There are plenty of interesting design opportunities for photo editing with a tool like Lightroom on a tablet, and a phone/phone layout doesn't quite provide that in my opinion (even the Nexus 6). The phone layout isn't terrible, though. It's actually pretty easy to make basic adjustments and edits.

Another thing to keep in mind is that Lightroom Mobile requires an Adobe Creative Cloud membership. Users can of course take advantage of Adobe's 30 day trial period, but after that you'll need to be a subscriber.

Lightroom Mobile also doesn't support DNG files, which would admittedly be a hefty task for mobile hardware. It goes without saying that the app doesn't support Android's new DNG capture either. Adobe does say that the flexibility of Lightroom Mobile's editing capabilities is similar to editing a RAW file, however, since the app uses a "smart preview" of your remote photos (which Adobe says is "based on" the DNG format) to exchange edits or changes between the devices.

Oh, and one more thing - the app's actual interface is basically the same as its iOS counterpart. Or, rather, its iPhone counterpart because, you know, the whole tablet thing. I'm not bitter.

To say nothing of the iconography, so many of the interface paradigms, from the funky hamburger menu to the center-mounted menu which drops down from the toolbar, feel very out of place on Android. 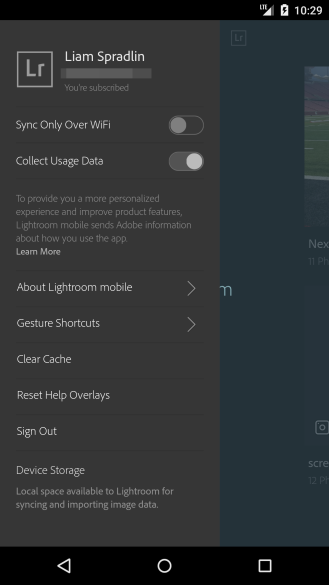 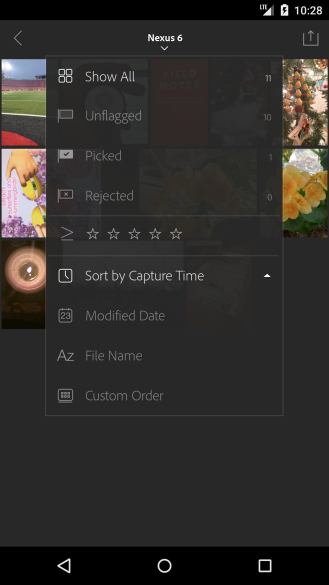 Yes, the hamburger is a sliding panel adjacent to the main screen yet simultaneously on top of a colored overlay.

If you haven't jumped ship yet, let's look at the rest of the app.

Once you've gone through Lightroom's first-run process, you'll be greeted with a tiled list of your photo collections. These can be collections of locally stored photos, or of photos synced with Lightroom on your desktop or other devices, through Creative Cloud. Users can create collections on a mobile device or desktop, and sync those photos (and changes) between devices.

A two-finger tap on a collection will show you its "metadata" including things like flagged/picked counts, last sync time, and size. 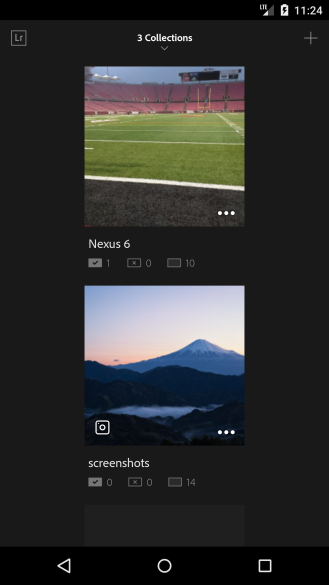 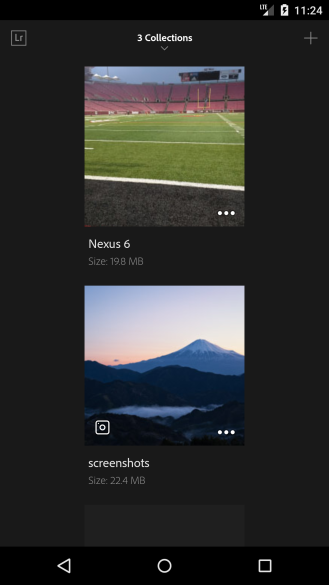 The two-finger tap is a gesture present throughout the app. While editing, for instance, the gesture will reveal metadata or the histogram. 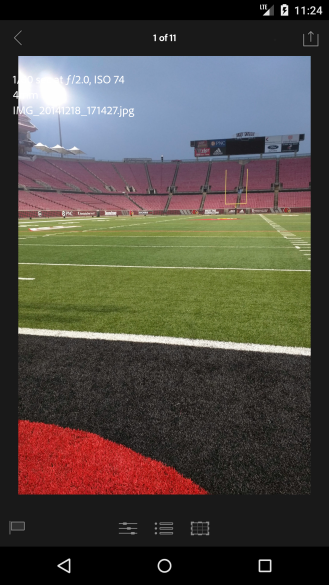 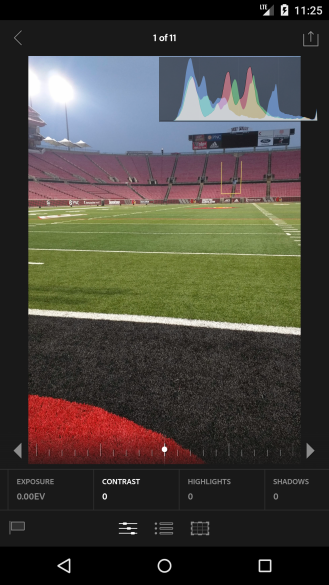 Once you've opened an individual photo, you'll do all editing through a bottom toolbar. It has three simple icons - adjustments, filters, and cropping. Adjustments include common Lightroom fair like white balance presets, temperature, tint, exposure compensation, contrast, highlights, shadows, white and black levels, clarity, vibrance, and saturation. Filters range from creative to color, B&W, "detail," and effect (vignettes and grains). There's no support for custom filters but Adobe didn't rule out the possibility of added support in the future.

While the app doesn't have Lightroom's full suite of tools, it does have some of the desktop software's more useful sorting/triage features. Users can rate and sort photos quickly using the dropdown menu at the top of each collection, flagging individual images with a simple swipe gesture. 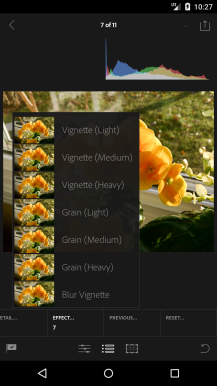 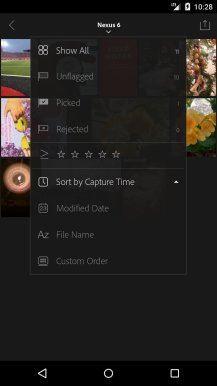 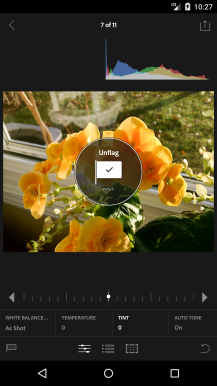 Once you're done editing, you can sync your photo or wait for automatic sync. Alternatively, users can share photos to other apps or start a slideshow (there's no Chromecast support, though). 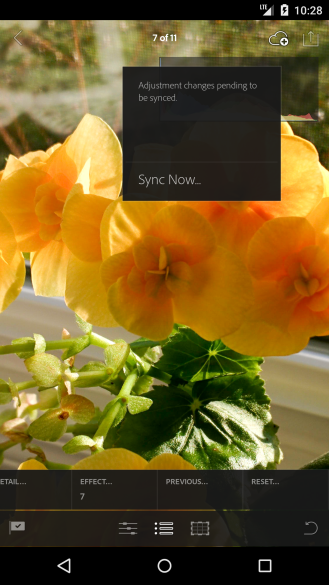 Overall, Lightroom Mobile could be worse - it could be missing from the Play Store entirely. That said, it could be a lot better too. If you can look past the lack of official tablet support and the iOS-flavored interface, Lightroom Mobile does have a couple of neat things to offer - simple LR-style editing and sorting on the go, and useful sync between Lightroom on your various devices. Past that, it's not particularly inspiring, and probably not something worth specifically getting a CC subscription for.