If you live in the US, you're probably familiar with the AMBER Alert system, which broadcasts information on missing or abducted children on television, radio, and even digital road signs in relevant local areas. The system has been expanded in recent years to include cable television, satellite and Internet radio, and even less precise digital platforms like Google Maps. Today Facebook announced that it will be showing AMBER Alerts to users in affected areas on both the web and mobile.

Starting today, Facebook will receive AMBER Alerts issued from the National Center for Missing and Exploited Children, which gathers information from local law enforcement precincts around the country. If you're currently located in an area experiencing an AMBER Alert, you'll see it in your news feed on Facebook's website or on the Android or iOS Facebook applications. The alerts will not trigger a notification (unlike the AMBER Alert system that's already built into some smartphones). Alerts can be re-shared by users. 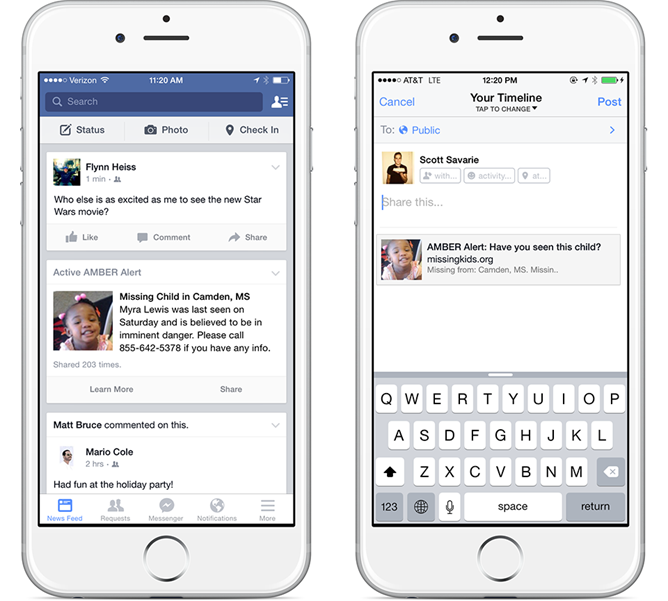 On one hand, I apologize for the iPhone screenshot - it's the only one Facebook provided. On the other, I'm glad there's no AMBER Alert in my area to screenshot.

The alerts will have as much information on the child as possible, including a photo, descriptions of clothing, and information on any suspected abductors and vehicles. Considering how many people are spending more time on social networks and less time with conventional television and radio, the expansion is certainly a worthwhile one in the cause of finding missing children.