Capacitive touchscreens are not ideal tools for 3D modeling. Unless you have an active digitizer and stylus, or superhuman patience, or preferably both, the amazing models on display in the screenshots below will probably be unattainable in the new 123D Sculpt+ app. But that doesn't mean it's not fun to try out a tool that, at least on a technical level, has a lot in common with professional 3D modeling programs. The app comes from Autodesk (a company which should know a thing or two on the matter) and it's a free download. 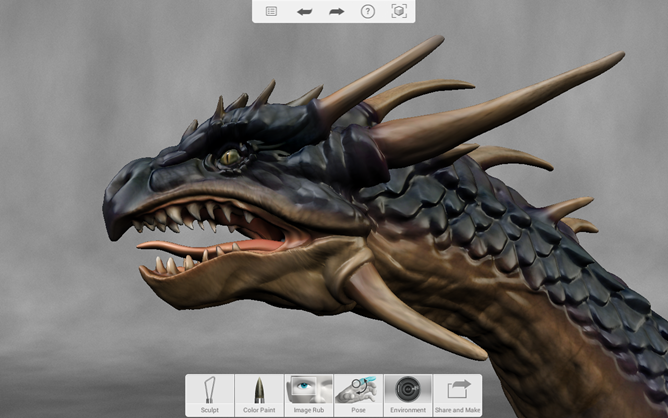 Sculpt+ makes a few concessions to the limitations of modeling on phones and tablets. While most of the standard tools are available, you'll need to spend a lot of time using pinching and panning gestures just to navigate around your digital clay and create the joints and extensions in your skeleton. Once that's done you move on to sculpting and shaping, then digital painting. It's a long, complex process, which is probably why Autodesk has included a handful of pre-made models for users who want to try out the more advanced processes without having to make something from scratch. Various faces, full-body human models, animals, and even aliens are available. When you're done painting you can move on to a pose, but Sculpt+ doesn't include animation options.

Having pointed out that a smartphone might not be the best way to make 3D models, the app is surprisingly effective, and as easy to use as it can be in the circumstances. And if you do happen to have both the tools and the skills to make something really cool, you can export your creations as OBJ files to work with them on a desktop. If you're absolutely enamored with your creation, you can even order a 3D model and have it shipped to you. There's an integrated gallery and upload function if you'd rather just check out what others have made.

Given the demands of rendering and modifying 3D models, I doubt 123D Sculpt+ will run well even on mid-range hardware. You'll need Android 4.2 or later to run it, but it's compatible with both phones and tablets and has no in-app purchases.