Update, January 11th, 2015: Verizon has issued another update alert for the Galaxy Note 4.4.4. This one also updates the phone to 4.4.4 and includes the same changelog, but for some reason the build number is changed to N900VVRUDNK1. Whether or not there was a problem with the original rollout, we can't say, but it appears to be continuing.

No, it's not Android 5.0. There, we've got that over with. And while I'm sure at least some owners of the Verizon version of Samsung's penultimate Note are disappointed at the lack of Lollipop, others will be happy to see it updated to the latest version of KitKat. A new software update is rolling out to Verizon's Samsung Galaxy Note 3 right now (PDF link), with Android 4.4.4 in tow. The last time the phone got an Android version bump was the KitKat (4.4.2) update back in May.

Note: the Verizon document lists the update as software version "N900VVRUCNC4." This appears to be an error on the company's part: the same version number was used for the May update. Verizon Note 3 users on the company's support forum have reported that the 4.4.4 update is actually version N900VVRUDNJ6. 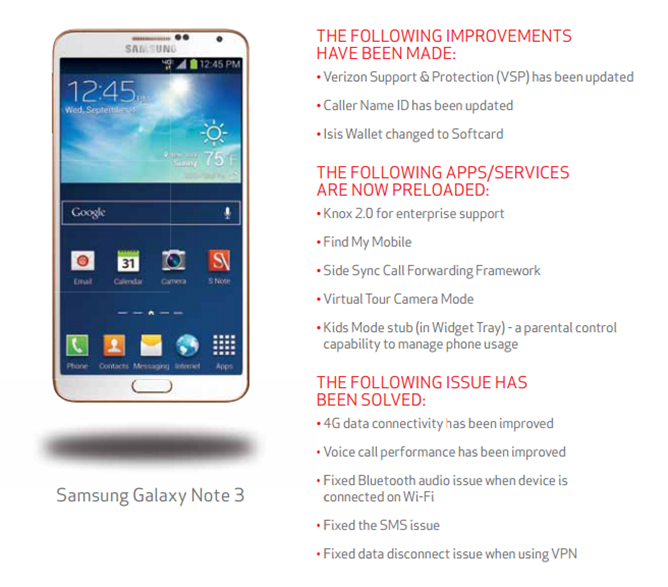 4.4.4 isn't the only thing included in the new update. According to Verizon's documentation, the update should improve LTE connectivity, voice reception and/or sound quality, a couple of VPN and SMS issues, and an odd bug that caused Bluetooth audio errors when using WiFi at the same time. But of course, it wouldn't be a Samsung phone without some added software on top. The update pre-installs the latest version of the Knox encryption app, Side Sync call forwarding, a "virtual tour" camera app, and the new Samsung kid's mode that the company has been bragging about in its commercials. Verizon's support, caller ID, and Softcard payment (formerly Isis) apps have all been updated as well.

If you've rooted or otherwise modified your phone with tools like Towelroot, you might want to wait on this update - Verizon OTA files have a nasty habit of closing previous methods for root access. And of course, any modifications to the /system partition or the recovery may cause the update to fail anyway. If you're running stock software, check the update button in your Settings menu as usual, and don't be surprised if it takes a few days to get to your Note 3.

[Weekend Poll] How Much Do You Expect To Pay For Your Next Smartphone?