If you haven't heard of the Electronic Frontier Foundation, usually shortened to EFF, it's sort of like the American Civil Liberties Union for the Internet and other digital issues. The non-profit organization's mission statement says that it "champions user privacy, free expression, and innovation through impact litigation, policy analysis, grassroots activism, and technology development." You'll rarely see a headline-grabbing story where tech intersects public policy that the EFF hasn't at least commented on, if not actively campaigned for or against. 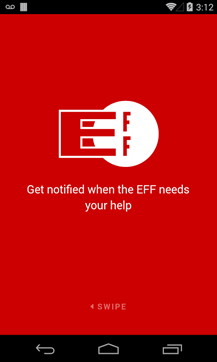 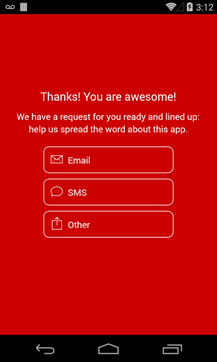 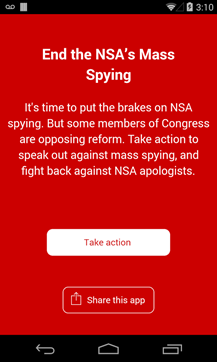 So when these people say they decided to develop an app for Android and specifically not for iOS, there's probably a good reason why. The new EFF Alerts app is quite simple: it just notifies you when there's a new issue that the EFF wants the public to take action on. Usually this means a form letter to a United States congressman or simply spreading the word on social networks. But you'll only be spreading the word on Android, because the EFF has staunchly refused to release the app to Apple's App Store, and iOS has no out-of-the-box way to sideload software.

So what's the deal? According to the EFF's announcement page, the organization refused to accept Apple's Developer Agreement and accede to its mandatory DRM additions. "As we have been saying for years now, the Developer Agreement is bad for developers and users alike," says the announcement, going on to cite chapter and verse of the App Store rulebook. The EFF objects to Apple's ban on reverse engineering for the purposes of compatibility, its ban on apps appearing on non-approved iOS distribution platforms like Cydia, Apple's insistence on approving even minor bug or security fixes, and Apple's capability to remotely disable apps and remove them from users' devices.

Firstly and most importantly, the EFF objects to Apple's "ban on public statements."

Section 10.4 prohibits developers from making any "public statements" about the terms of the Agreement. This is particularly strange, since the Agreement itself is not "Apple Confidential Information" as defined in Section 10.1. So the terms are not confidential, but developers are contractually forbidden from speaking "publicly" about them.

Keeping customers or partners from speaking about the terms of any contracts or agreements isn't illegal - it's a fairly common portion of business and civil contracts, in fact. But the EFF's objection to curtailments of developer's rights to object publicly to Apple's policies, and to face expulsion from the App Store if they disobey, seems reasonable enough. The EFF is hosting a petition to Apple to change the terms, for what it's worth.

Google isn't immune to developer ire: just a few months ago many Android developers cried foul over having to include physical mailing addresses when selling paid apps. But after being publicly called out over their policies, by what is probably the leading lobbying and public defense group in the digital world, surely someone in Cupertino is going to notice.

If Apple's past behavior is anything to go by, they'll change their policies in 2-4 years at an announcement with a thousand cheering journalists, at which point they'll pretend it was their idea all along.

HTC Announces YouTube Live Streaming For The RE Camera